The museums on the Lungarni of Pisa 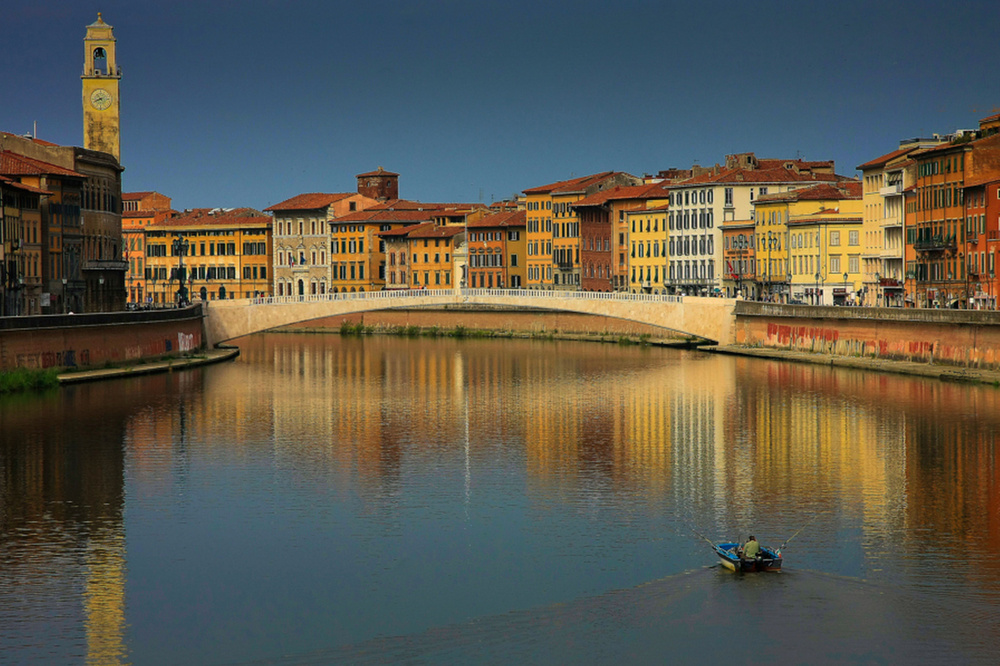 Pisa’s lungarni (riversides) are less famous than the Tower or Piazza dei Miracoli, but they are certainly the most romantic place in Pisa. Italian and non-Italian poets and artists have let themselves be enchanted by the Lungarni, drawing inspiration from their works from the splendid noble palaces overlooking the Arno. The Lungarni are wide streets that, on one side skirt ancient buildings, and on the other the “spallette”, made of stone and brick that constitute the highest part of the river banks. The breadth and curve of the Lungarni gives a stately and wide-ranging aspect to the historic center, especially at sunset. In the evening, the street lamps placed on the side of the Arno river are reflected in the water, creating a magical atmosphere.

The presence of important museums and exhibition venues has created a real “museum system” on the Lungarni.

We propose a suggestive walk that has the river as its main theme, which has always been inextricably linked to the life of the city.


For more information contact the Tourist Office of the Municipality of Pisa at 050.550100.

The first stop on our itinerary is the beautiful Museum of Ancient Ships (opened in June 2019) housed in the Medici Arsenals: 800 exhibits displayed in 8 sections with the findings of 1998 during the renovations of Pisa San Rossore station. A large excavation site was opened, which returned about thirty boats from the Roman era and thousands of ceramic fragments, glass, metals and elements organic material. The boats were perfectly preserved, thanks to the complete lack of oxygen and the presence of underground aquifers, thus saving the usually perishable materials, as well as a large number of vases and amphorae. The exceptional discovery made Pisa speak as a “Pompei of the sea“.

The second stage touches the Royal Palace, built in the century. XVI from Francesco I de ‘Medici, who wanted a winter office in Pisa for the Medici court. Among his guests, also Galileo Galilei, who seems to have shown here with his telescope the firmament to the Grand Dukes. Passed to the Lorraines, the palace took the name of “Reale” when it became the residence of the Savoys.

It is currently the headquarters of the Superintendency. In the noble rooms on the first floor, it houses the National Museum, which documents the wealth of the three dominant dynasties of Medici, Lorraine and Savoy: paintings, portraits, furnishings, tapestries, armor. Of particular importance is the collection of ancient weapons of the Gioco del Ponte (bridge game), which takes place in Pisa on the last Saturday of June.

Third stop is the National Museum of San Matteo: the most important museum of painting and sculpture in Pisa. It boasts the splendid collection of illuminated manuscripts (XII-XIV century) and sculpture from the Middle Ages to the 16th century, among which the masterpieces of Nicola Pisano and Donatello stand out. Significant collections of wood and painting sculpture: the latter includes more than 200 works created between the early twelfth century and the modern age by important artists including Giunta Pisano, Berlinghiero, Simone Martini and Masaccio. The value of these works leads more and more scholars to recognize that the Pisan was the greatest Italian pictorial school until the sec. XIII.

Crossing the Arno, we arrive at Palazzo Lanfranchi, named after the noble Pisan family, inside which medieval structures and decorations are still visible. The palace is home to the Graphics Museum, which houses over a thousand pieces of the Timpanaro Collection, one of the most important public collections of contemporary graphics, as well as donations from great Italian artists. The Museum is also an exhibition venue for temporary exhibitions.

Beyond the Ponte di Mezzo, the last stop on the itinerary: Palazzo Blu, an ancient palace of the Pisan nobility, inside which are exhibited artistic masterpieces owned by the Pisa Foundation, including the Simoneschi Collection, which includes works by the Pisan artist Giuseppe Viviani. The rooms are furnished in eighteenth-century style, with period furniture and furnishings. Palazzo Blu has now established itself as the city headquarters of the most important temporary exhibitions. In particular, the one held in autumn, which has become a high-profile event, national and not only.

The itinerary would end here .. However, Pisa still has some surprises, all to be discovered. We therefore ask you for a little more effort.

A little farther on, the Church of Santa Maria della Spina will not go unnoticed: cusps, tympanums, tabernacles, inlays, rosettes and statues of Pisan masters from the 14th century make it an extraordinary example of Pisan Gothic, with a rectangular plan and polychrome marble cladding. Nearby, the Church of San Paolo in Ripa dʻArno, known as the Duomo Vecchio, among the masterpieces of the Pisan Romanesque, to which the faculty of worship and public functions was granted during the construction of the Cathedral.