Palazzo Reale has been over the centuries the residence of three dynasties in Pisa: Medici, Lorraine and Savoy. The current appearance on the Lungarno Pacinotti is the result of the architectural intervention of Francesco I de ‘Medici, who at the end of the 16th century decided to abandon the “Palazzo Vecchio” (near the current Museum of San Matteo) to move on the other side of the Arno River. Of the existing houses was spared the tower of Verga d’Oro, from which it is said that Galileo has shown the operation of the telescope to Grand Duke Cosimo II.

The palace has recovered environments and connections with the adjacent buildings that made up the complex of the grand ducal court. It preserves the appearance of the patrician residence, with furnishings and furniture of the XVII-XIX centuries, also collects portraits, furnishings, tapestries, armor of the royal families, including the refined tapestries of Flemish and Florentine manufacture, and the armor of the Game of the Bridge (which takes place the last Saturday of June on the Ponte di Mezzo).

Also of note is the precious compartment from the polyptych of San Nicola da Tolentino, painted by the young Raffaello in 1500, the portrait and court dress of Eleonora di Toledo by Bronzino in 1549.

Also on display the collection of surgeon Antonio Ceci, the plaster casts and paintings of Italo Griselli, one of the major Italian sculptor-portraitists of the first half of the twentieth century. Among the most recent acquisitions are paintings by Plinio Nomellini, Spartaco Carlini, Galileo Chini, Mino Rosi and Gianni Bertini.

It is today the home to the Superintendence of Archaeology, Fine Arts and Landscape for Pisa and Livorno 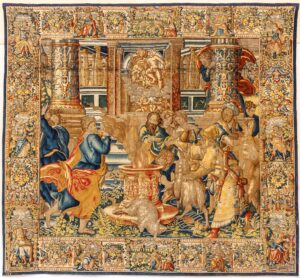 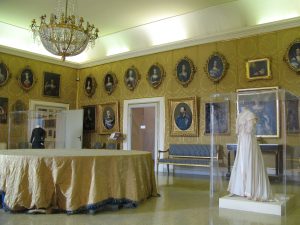