The Church, founded in 1230, was originally a votive oratory, rising at the foot of the bridge that connected the present Via Sant’Antonio to Via S. Maria.
It was given the name it still bears today in 1333, when a thorn from Christ’s Crown of Thorns was donated to the oratory.

The Church underwent many changes in its architecture and decoration. The architects of the Pisan school took the decorative motifs from the Cathedral of Siena and Orvieto and mixed them with designs typical of funeral monuments. The strong connections with Giovanni Pisano’s style are clearly seen in the sculptures, especially in the row of Apostles.

The interior is simple, with walls decorated in horizontal stripes of two-tone marble. On the high altar there are statues, attributed to Nino and Andrea Pisano, of the Madonna and Child, St. John the Baptist and St. Peter. The tabernacle on the left wall once held the Thorn relic, now in the church of S. Chiara (Via Roma, near the Leaning Tower).

Because of subsidence, the church often had to be repaired and eventually, in mid 19th century, it was decided to dismantle and move it to a position higher above the river bed where it was built, with the result that the sacristy was destroyed and several statues lost.

The Church is today a venue for modern art exhibitions 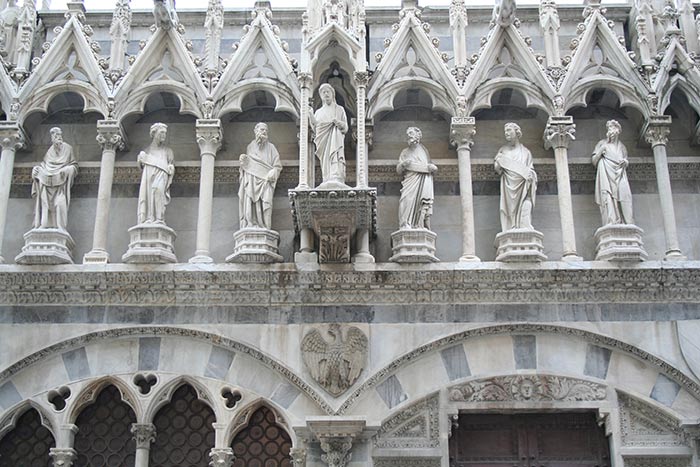