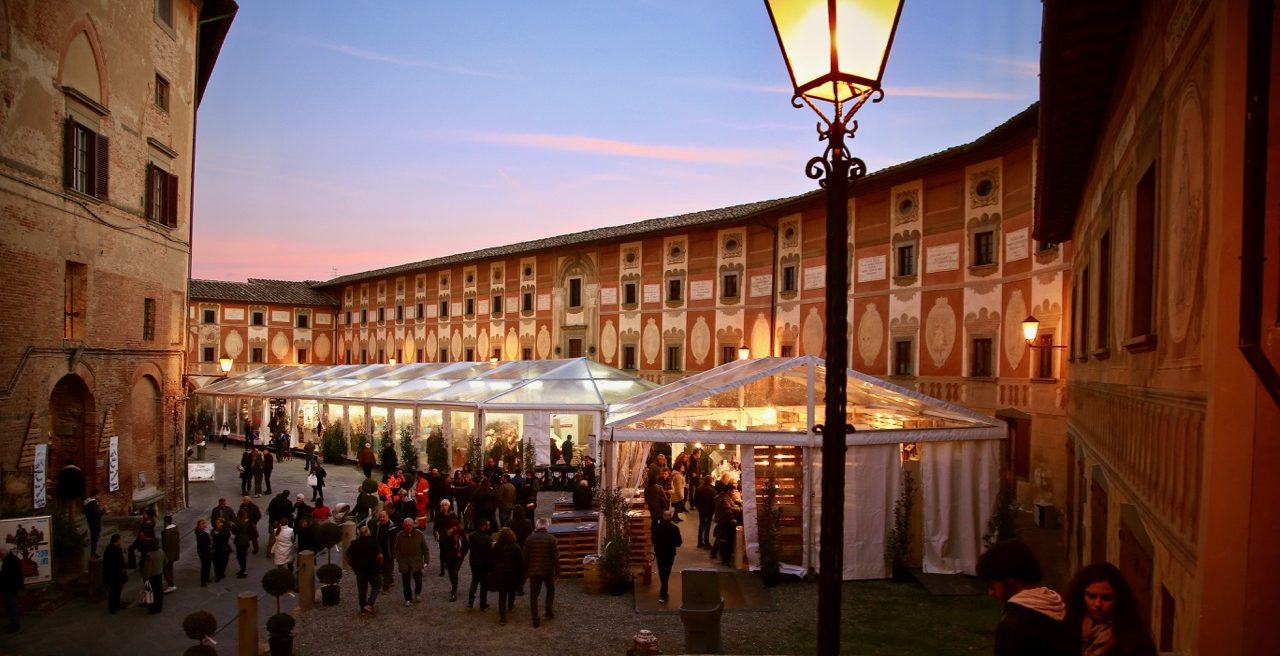 That stretch of Pisan territory, that from San Miniato touches Palaia and Peccioli to then goes south to the crags of Volterra, can be renamed “the truffles road“. Because in these lands of ancient tufaceous origin the highly prized white truffle, but also other truffles (the bianchetto, scorzone and even black), find their ideal habitat.

The itinerary can only start from San Miniato, a place of excellence for white truffles and once a must for pilgrims along the Via Francigena. It is no coincidence that one of the first Truffle Associations in Italy, Tartufai of San Miniato, was born here, in order to promote the protection of the environment, the collection, production and enhancement of truffles. Here the National White Truffle Market Exhibition has been held for half a century with various kinds of initiatives dedicated to his majesty, the white truffle, for three weekends in November in the historic center. Where the other excellences of the territory meet, such as the wine and other products of the Vignaioli Association, or important realities such as Savitar, which for over 50 years has dedicated itself to this activity, transforming the white and the black truffle into products such as cream cheese, salami and pecorino cheese, vinegar and oil, all with truffles. The company also organizes truffle hunting with lunch and buffet.

San Miniato is not only synonymous of truffles and good food, but it boasts a high-value historic center, with an artistic heritage open all year round and a rich calendar of events for all tastes. Not only San Miniato lives on truffles: even the towns on the nearby hills such as Corazzano, Cigoli and Balconevisi organize parties, festivals, tastings in his honor all year round, although more concentrated in October and early November. For these countries, enhancing truffles means highlighting other typical products.

The climate, the soil and the vegetation means that even in the nearby area of Palaia, which is also recognized as a city of truffles, it is possible to find the particular White Truffle, that reaches its maturation period from September to December. Thanks to a study by the University of Pisa, the first Identity Card of the Tuber Magnatum Pico (Latin name of the white truffle) and of the Bianchetto or Marzuolo Truffle (the one found between January and April) was born here.

Nearby we recommend a visit to the village of Palaia, with the beautiful Romanesque parish church of San Martino and the small but pretty medieval historic center. Along the scenic road, between olive groves and vineyards, it is worth stopping at the village of Villa Saletta (which in summer hosts the popular theater festival dedicated to the Tuscan actor Mauro Monni, film partner with Roberto Benigni), or move to the town of Montefoscoli which houses a Museum of Agricultural Civilization and a mysterious temple, perhaps used by Freemasonry or perhaps even for esoteric or human experiments, dedicated to Minerva Medica.

Moving to Peccioli, more precisely in the small village of Ghizzano, don’t forget to visit the characteristic Italian garden (Sound Garden) of the Ghizzano Estate,. We also recommend a stop in Peccioli: among the “chiassi” (the alleys) and the small squares an interesting journey of contemporary art unfolds and an offer for lovers of the art of four museums. For children, instead, the paths of the urban adventure park “Pecciolo Avventura” and, just outside the town, the Prehistoric Park.

Last stop Volterra, with a millenary history that dates back to the Etruscan era, and a city famous also for its alabaster processing. The truffle association of the upper Val di Cecina, which brings together the truffles of Volterra and the neighboring municipalities has, as its purpose, the conservation and protection of these lands. And that every year organizes the gastronomic review Volterra Gusto, which celebrates truffles in three distinct periods of the year. A walk in the historic center of this jewel is a real dive into the past, perhaps using the Volterra Card to visit the main attractions alone, as a couple or with the family.

These companies offer visitors an experience: that of the “hunting” with truffles in the company of the truffle hunter and his dogs. The truffle hunter must be good at choosing the right time for the harvest, he must know his territory very well and, above all, he must have a special relationship with his dog. The truffle hunter trains the dog from the age of sixth month, playing with him so that the search for truffles becomes a playful activity. The search is a real treasure hunt: the animal, followed by its owner, enters the woods until its nose is attracted by the fragrant nugget hidden under the ground. The master, until then silent and attentive observer, collects the truffle and rewards the faithful friend with a biscuit

In this territory, around the precious tuber, a true truffle civilization has grown over the centuries, with its rules, its codes of conduct, its research methods, its proud local identity. It is no coincidence that there are two Tartufai Associations here: one in San Miniato and the other in the Alta Val di Cecina. And here, companies of established tradition were born , some of which are little more than family-run, others of a more structured but all artisan dimension. Truffles are extracted thanks to the contribution of spades or ice picks, that truffle hunters generally make with their own hands, and the fundamental contribution of dogs, trained from an early age in this difficult research which, contrary to popular belief, continues for a whole year as each season supplies its own truffles.

From January to April the bianchetto truffle is harvested, a less noble version of white truffle but very fragrant and qualitative; in the hottest period, between May and August, it is the turn of the prized black truffle (Tuber melanosporum) and finally, from September to December the research focuses on the lord of all the canteens, the white truffle (Tuber Magnatum pico), which is concentrated in the countryside around San Miniato. But if we were to stop here we would do a serious wrong to other kinds of truffles that report their excellent favor among gourmets and experts in the field, first of all the scorzone truffle, in the double winter and summer expression.

The calendar of events related to truffles is rich, generally concentrated between October and November. Not only San Miniato lives on truffles: also Corazzano, Palaia, Ponte a Egola, Castelfranco di Sotto and Cigoli organize parties, festivals, tastings in his honor. Valuing truffles means, for these countries, to make known also the other typical products of the territory.
We start with the market exhibition in mid-October in Forcoli, we continue with those of the hamlets around San Miniato that anticipate the highlight of the San Miniato White Truffle Market Exhibition in the last three weekends of November. Without forgetting the review Volterra Gusto which presents the truffle three times a year (in spring, summer and autumn) in the frame of Piazza dei Priori.