The Tessieri school • This is one of the largest cooking school in Italy: 800 square meters of multipurpose spaces, open space with specific laboratories for cooking but also to make pastry, baked goods, pizza, ice cream, and chocolate.

The Villa Medicea of Camugliano • The villa, finished in 1533 together with the Oratory of San Filippo, houses a bust sculpted by Donatello. The villa passed in 1637 to the Marquis Filippo Niccolini who added a double flight of steps and an English Garden.

In the Middle Ages, Ponsacco was an important castle on the border between Pisa and Florence, and for this reason the scene of frequent clashes between the two rival republics. The center was once surrounded by ramparts and walls, later destroyed by the Florentine army and never rebuilt. 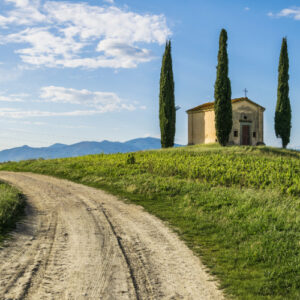 The little church of Camugliano

Ponsacco shows no artistic attractions except for the Oratory of the “Madonna della Tosse”, keeping a terracotta by Luca della Robbia, and the church of San Giovanni with a sloping bell tower and the bell with Pisa coat or arms engraved on it.

In the surroundings, a must is the Villa of Camugliano, also known as Villa Niccolini, a Medici villa and imposing building with four corner towers preceded by a beautiful avenue lined with cypresses. The villa was ceded by the Medici to the Marquis Filippo Niccolini, who modified the original structure.

Its territory is mainly flat and urbanized. The only green lung is the Poggini area, ideal for walking or cycling thanks to its set walking trail.