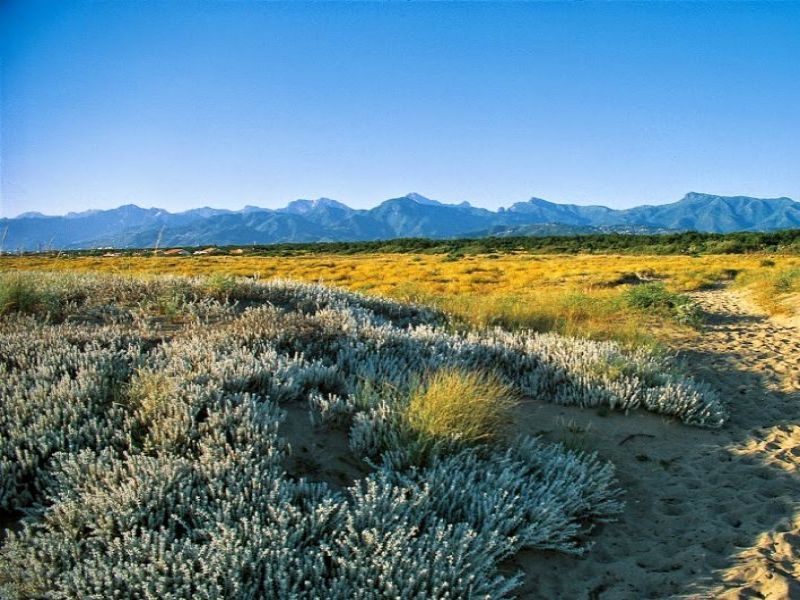 The Tombolo Estate, within the Migliarino, San Rossore and Massaciuccoli Park, occupies the southern coastal strip of the Park between the Arno and the Calambrone. The name of the Estate derives from the Latin “tumulus”, which means “relief of the land“, and clearly indicates how the territory originates from the cords of coastal dunes produced by the constant contribution of river sediments.

In the 1930s a vast project with the foundation of Tirrenia and the construction of numerous marine colonies preceded the current development of the Pisan coast.
The Tombolo Pisano represents the biological border between the coastal sub-Atlantic forests of western Tuscany and the Mediterranean ones, existing south of Livorno.

Trail of the Dunes

Departure: Port of Marina di Pisa
Arrival: Calambrone sud
Journey time: about 4 hours
Length: 12 km
The environment of the route is made up of woods, inhabited centers and dunes.
The itinerary initially includes the crossing of a short urban stretch in Marina di Pisa. Subsequently it continues in pinewood with domestic pine and undergrowth of oaks.
After skirting the ancient station of Marina di Pisa (valuable), continue on a parallel path until you reach via Bigattiera. Then return to the woods, on an area flooded with ash and other hygrophilous species. Continue along a path that crosses short intervals of dunes and blades until you reach Tirrenia at the seafront at the WWF oasis “Dune di Tirrenia” (you can freely access the Oasis and the adjacent municipal beach unless you to the coastal dunes, for which a guided view must be booked).
The path continues along the seafront up to Calambrone, where we turn towards the woods on the Vione di Vannini. Entering the wood there is a small holm oak grove and shortly after a cork oak, then it continues in an area subjected to pines with scrub up to via dei Porcari following the Lamone ditch that continues with dense hygrophilous vegetation with cattail, marsh reed and iris of water: here also woody fragments and Mediterranean scrub alternate, followed by an area of ​​holm oaks and young maritime pines.

Departure: Basilica of San Piero a Grado
Arrival: Port of Marina di Pisa
Journey time: about 3 hours
Length: 7.5 km
The environment of the route is made up of cultivated woods, local roads and sediment of the old Trammino (steam tramway that connected Pisa with its Pisan coast).
Going along the first part of the path you reach the tramway grounds, which you can follow along a rural road. In this section some large ash and plane trees grow along the railway. Continue along a short and narrow path that runs along the farmsteads and then, near Viale D’Annunzio, take a dirt road with a row of domestic pines until you reach the town of Marina di Pisa. Shortly before the town, you can see the historic pump at some distance.
Several sections of the route can be traveled with mountain bikes.

Departure: Basilica of San Piero a Grado
Arrival: Calambrone sud (with a branch to Cornacchiaia south entrance)
Travel time: 4-5 hours
Length: almost 15 Km
The environment of the route consists of woods and open areas. From S Piero a Grado, along the coast, follow a dirt road that runs along a mesophilic forest on one side and cultivated fields on the other. Here it is possible to observe different birds, including the bee-eater, the swallow, the buzzard and the kestrel.
Then we enter the flooded woods with ash and alders, followed by a xerophilous forest on ancient dunes, with oaks and large pines. Then the land turns upside down, starting with a mesophilic wood full of farnias followed by a hygrophilous wood with ash trees, in which we can observe the Greek periploca, a rare tropical liana, a tertiary relict.
Proceeding along the path, we enter a pine forest with a beautiful undergrowth of phillyrea, cistus, butcher’s broom and holm oak until we cross Via Bigattiera. Continue along the path to the Riserva Oasis WWF Bosco di Cornacchiaia; along the path there are some ancient pines and some orniello patches, a species of ash spread in our parts in the hills and quite rare in the Park, where the ossifillo ash predominates, more typical of the plains. After passing the barrier on Via Porcari and the Tirrenia farm, take the road to the end in the water scooping area: next to the Navicelli canal in the wet meadows are the salicornia and the sea star at the edge of seasonal brackish water ponds where numerous birds rest (ducks, gray herons, egrets, various waders). The brackish wetlands in the Park are an asset because they are less common than freshwater wetlands. Continue along a narrow road along the Navicelli canal until you reach the road bridge between Tirrenia and Livorno at the mouth of the Calambrone.
It is possible to travel long distances with the bike and the entire mountain bike trail.

Departure: Pisa, Via Livornese junction with Via di Viaccia (near an ENEL cabin)
Arrival: Loc. Stagno, at the confluence of the Navicelli canal with the Scolmatore
Journey time: about 5.30 hours
Length: approximately 15.5 km
The environment of the route consists of wooded areas, urban area and banks of the canal.
The first part of the route develops on the right bank in a man-made area with shipbuilding, residences, farms and cultivated activities. After crossing the bridge in the Mortellini locality, for a while follow the network of Camp Darby, inside which there is a pine forest. Once the fence is finished, you begin to walk along a very varied mesophilic forest with large oaks, poplars, holm oaks, etc. Then you find yourself in the reserve of Cornacchiaia-Bosco dell’Ulivo, which continues for a few kilometers, even before with the mesophilic forest and, in the final part, with a very intricate wetland, where we find brackish waters (rare in the Park, generally characterized by blades). of fresh water) in which the salicornia grows; in this area there are many water birds, including gray heron, little egret, cormorant, mallard, teal, shingle, garganey, shelduck, marsh harrier and numerous whales.