The Parish Church of Santa Maria dates back to the 12th century. It is the oldest and most important church in Vicopisano area, the only one to have been erected outside the walls. It is a well-preserved example of Pisan-Romanesque church, featured by a basilican plan with a single apse.

The façade in local “verrucano” stone shows two orders horizontally divided by a frame. The upper part – adorned by suspended arches – is featured by a double window. The lower part – with three portals – is enriched by semicolumns with arches containing geometrical and vegetable sculptures. On top of the left pilaster, a stone bas-relief ( 8th – 10th century) representing an episode of the Gospel.

The interior is divided in one nave and two aisles, each of them with 12 granite columns and different capitals. A magnificent 13th century wood Deposition from the Cross in the apse has got evident similarities with the Deposition in the Pinacoteca di Volterra. It is a rare example of this sacred representation, the only one that has preserved almost all the original figures after the restoration.
Traces of some 13th century frescos remain on the massive walls in “verrucano” stone. They represent scenes from the Gospel, testifying the tradition to depict the holy histories (instead of writing), in order to make them more understandable to the uneducated believers. 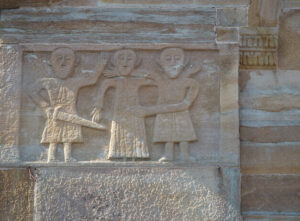 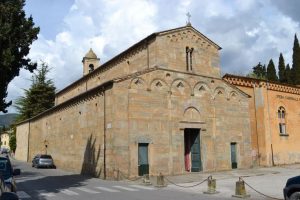