The ‘Palazzo Comunale‘(Town Hall) is the current seat of the Municipality of San Miniato. It dates back to the 14th century, as the residence of the Twelve Lords – Defenders of the People.
The Palazzo, originally composed of a single block, hosts at ground floor the “Oratorio of Loretino”. It has been considered since 1399 an important place of worship because it kept the venerated image of the Holy Crucifix, which was moved in 1718 to the opposite church, a Sanctuary dedicated to it. The Crucifix was replaced by the Madonna di Loreto (hence the name of the oratory) in the central niche.

On the first floor, the the oldest part of the Palazzo, with the magnificient “Hall of the Seven Virtues” (Sala delle Sette Virtù), the 7 theological and cardinal virtues: caution, justice, temperance, fortitude, faith, hope and charity. It was the place where decisions were taken by the local Government after the death of the German Emperor Frederick the 2nd. The frescoes, showing religious and civic imagery,were made between the 14th and the 16th centuries, thanks to the donations of the richest families.

Of particular interest is the collection of coats-of-arms (15th century) placed by the Florentine ‘vicars’ and noble families, according to the custom of the time. The Hall is used today to celebrate civil weddings.

It is part of the San Miniato Museum System. 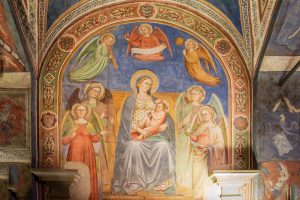