The Mille Miglia in Pontedera and the Night of the Motors

The Mille Miglia, the world’s most famous automobile competition, passes through Pontedera and will also be accompanied by a festive evening.
The appointment is for Friday 17 June, in the early afternoon the 111 Ferraris are expected to anticipate the arrival of the 425 historic cars of the 1000 Miglia (made between 1927 and 1957) and about 30 other cars including electric cars (participating in the Mille Miglia Green) and unique models of modern Supercars and Hypercars (Mille Miglia Experience).

The route starts as per tradition from Brescia and arrives in Rome and then returns to Brescia. The Pontedera stage will be the first in history to pass through the city. 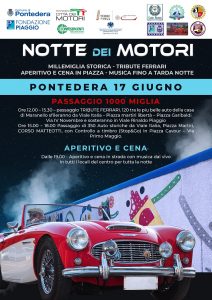 After the cars parade, the city will dress up for the Night of the Motors, with the possibility for shops to remain open and with the organisation of other initiatives.

As far as the route, the first Ferrari will make its entrance at around 1.30 p.m., with the motorcade then stopping at the Piaggio Museum. At 3.15 p.m., the first car of the Mille Miglia is expected. The roads involved are those, coming from the Tosco Romagnola at La Rotta, that will lead towards the centre: Via del Gelso, Via Indipendenza, Viale Italia, Ponte Napoleonico and Piazza Martiri della Libertà, where, as far as only the historic cars are concerned, a sort of circuit will be set up.
The cars of the 1000 Miglia will also parade along Corso Matteotti, as far as Piazza Cavour, before setting off again in the direction of Cascina.