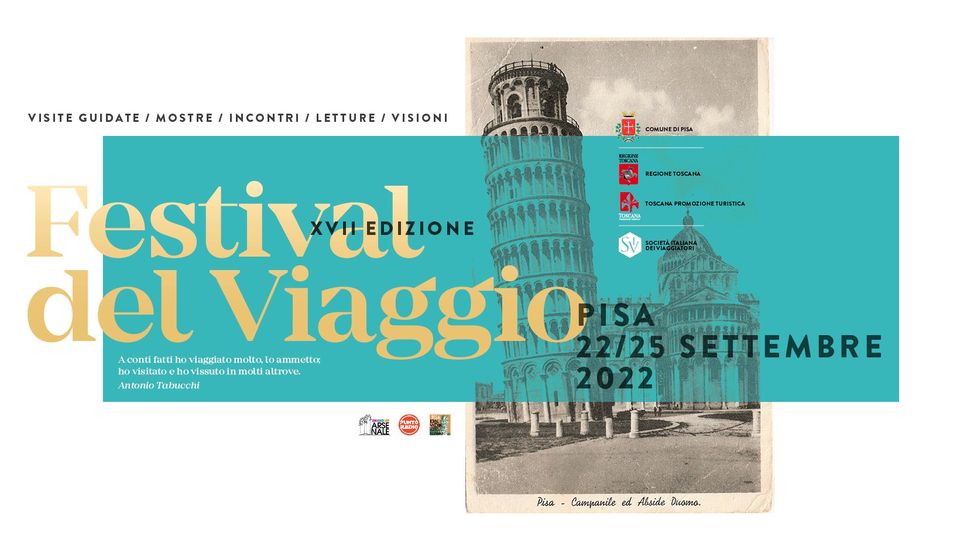 The first Italian festival for those who love to travel returns from 22 to 25 September in Pisa, where it all began many years ago. In the city of the Leaning Tower, the Festival will accompany tourists and residents to discover the city’s beauty. A weekend to talk, listen and experience journeys far and near. The festival’s base in Logge di Banchi will feature a vintage bazaar, a bookshop, a travel ‘disco’ and a radio lounge that will host famous artists and travellers and follow the many urban walks.

At the Royal Victoria Hotel on Thursday 22 September at 7 p.m., the photo exhibition ‘Wiki Loves Monuments Italia: dai valore alla bellezza’ (Wiki Loves Monuments Italy: give value to beauty) will be inaugurated, on the occasion of the tenth anniversary of the Wikimedia contest. The exhibition, open until 30 October, celebrates the ten editions of Wiki Loves Monuments in Italy, the world’s largest photo contest inviting all citizens to document cultural heritage by taking photographs to be published under a free licence.

Ten years ago the writer Antonio Tabucchi died. Some of his friends and fellow citizens will read his travel stories, in a kind of nocturnal vigil intended to pay homage to the great writer, entering at midnight on his birthday. The reading will take place on Friday 23rd from 10.30 p.m. on the terrace of the Royal Victoria Hotel, with an all-round view of the historic city.

On Friday 23 September at 9.00 p.m., the presentation of the Tuscany Bike Stories project: a new way of discovering three cities of art by bicycle through guided urban bike tours accompanied by testimonials. These are three mini-documentaries on as many bike routes in the urban centres of Florence, Pisa and Livorno, led by the festival director Alessandro Agostinelli and featuring Gaia Nanni in Florence, singers Petra Magoni and Frida Bollani in Pisa, and comedian Paolo Migone in Livorno.

All the events and appointments of the Travel Festival are free admission. Some (where indicated) are accessible only by booking via email