The Festival “Anima Mundi” is the traditional International Festival of Sacred Music, organized by the Opera della Primaziale Pisana. With the contribution of the Fondazione Pisa and the patronage of the Municipality of Pisa, Anima Mundi 2021 proposes a new artistic director, once again chosen from among the most famous names in the international field: the Englishman Trevor Pinnock, an authoritative protagonist of the investigation into the music of the past, both as a conductor and as a harpsichordist.

Seven concerts are scheduled, alternating as always in the evocative setting of the Cathedral and the Camposanto, for a journey through five centuries of music.

Opening evening, Thursday, September 9th in the Cathedral from 20.30; at the head of the instrumental and choral ensembles founded by him and united under the famous name of The English Concert, and with high-class soloists, the director will propose one of the most popular and impressive scores of the Baroque repertoire, the oratorio Messiah by Georg Friedrich Händel. Pinnock and the instrumentalists of The English Concert again on Friday 10th in the Camposanto, for a program of orchestral and chamber music, dedicated to a great protagonist of the second half of the seventeenth century, the “English Orpheus” Henry Purcell: to keep him company two authors of the next generation, the Englishman William Croft and another Händel.

Back in the Cathedral on Thursday 16th, but starting at 9pm, for an exceptional event with the music of one of the greatest composers of our time, Arvo Pärt, with the Estonian Philharmonic Chamber Choir and the Tallinn Chamber Orchestra conducted by Tõnu Kaljuste, who has always been the chosen interpreter of his great compatriot, playing six masterpieces, including Trisagion and Adam’s Lament. In opening, the winning piece of the International Competition of Sacred Composition that Anima Mundi wanted to announce also for this edition of the festival, graduating the Argentinean Miguel Angel Musumano.

In the Camposanto the three following concerts, purely instrumental. On Saturday 18th at 8.30 p.m., a monograph: three of the six Suites for cello solo by Johann Sebastian Bach will be played by a young but already internationally renowned interpreter, the Armenian Narek Hakhnazaryan. On Monday 20th an Italian ensemble, the Rinnovata Accademia dei Generosi, for the very popular Settimino by Ludwig van Beethoven and the “Trio dei Birilli” by Mozart, for which Lorenzo Corti will play the ancient viola built in 1662 by Antonio Casini in possession of the Cathedral of Pisa, restored a few years ago. Another monograph and another exceptional performer on Wednesday 22nd, when the Canadian Louis Lortie will play three of Beethoven’s major piano sonatas. 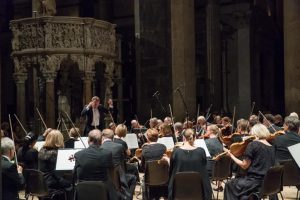 Closing on Friday 24th in the Cathedral at 8.30 pm, once again with a monograph: Hansjörg Albrecht and his legendary ensembles, the Bach Choir and Orchestra of Munich, in three sacred works by Franz Schubert, Magnificat, Salve Regina and Mass in F major.

The opening and closing concerts will be heralded by the Brass on the Tower: starting usually at 8:30 p.m., the customary welcome concert of horns, trumpets and trombones. Also this year the public of Anima Mundi will have the opportunity to support, through free offers, some solidarity and assistance projects in the territory. The initiative is promoted by the Archdiocese of Pisa-Caritas Diocesana.

Daniel Harding will lead the opening concert Saturday 7 September in the Cathedral, with the magnificent Swedish Radio Symphony Orchestra, of which he is musical director. Requiem by Johannes Brahms, deposition of the romantic spirituality, who will committ two important voices as the soprano Hanna Husahr and the baritone Mark Stone.

A completely different world Monday 9 September in Camposanto: Kristian Bezuidenhout, main name in the execution with ancient instruments, suggest a journey in the heart of the classic style, playing music by Wolfgang Amadeus Mozart and Joseph Haydn

Still ancient music, but in the Cathedral, Tuesday 12 September: a glorious director and bands, Trevor Pinnock and The English Concert, to accompany Jakub Jozef Orlinski, a very young counter-tenor in pages of Georg Friedrich Händel and Antonio Vivaldi.

One more time in the Cathedral, Saturday 14 September:  the choir Costanzo Porta and the Orchestra Cremona Antiqua, conduct by Antonio Greco, will display the first execution of the 12th Anima Mundi International Competition of Sacred Music Composition’s winner.

Istrumental music in the Camposanto, with the tribute to Johann Sebastian Bach celebrate Monday 16 September by a performer among the most praised these days, Isabelle Faust, who will play the monumental series from Sonate e partite for solo violin.

Wednesday 18 September in the Camposanto Il Rossignolo, italian ensemble no less fanciful than influential, conduct by Ottaviano Tenerani, an exploration of the entertainment music of the 18th century by Georg P. Telemann, Musica su acqua and Musica da tavola I.

Simmetrically at the opening, the ending is also a big event, Friday 20 September in the Cathedral, with the Stabat Mater, sacred masterpiece of Gioachino Rossini, played by four famous solo artists.