The area of the medieval “Tersana” (shipyard) expanded during 13th century at the time when military victories and the flowering of overseas commerce made it necessary for the city to find a suitable site for naval purposes. Military defeats in the following century and the crisis in mercantile activities turned this area into a fortress, with the battlements in brickworks.

The shipyard, gradually enhanced with other towers, became a fortress under the domination of Florence(1509), when the walls along the river were strengthened and the new Guelph Tower, 18m high, was built. It was given the name Guelfa in opposition to the Ghibellina tower. 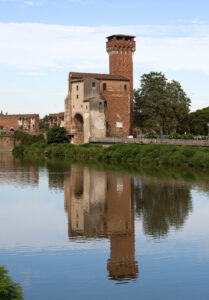 open only on special occasions