The church is recognizable on the Lungarni for its octagonal plan and pyramid cover. It is among the most mysterious churches of the city. Attested in 1138 as a building of the Hospitallers of Jerusalem is mistakenly considered the church of the Templars. Returning from the victorious First Crusade, the Pisans led by Bishop Dagoberto wanted to build a building that was church, hospital and convent taking as a model for the interior the Holy Sepulchre in Jerusalem and for the outside the Mosque of Omar.

The construction of an octagonal-shaped church inspired by the Holy Sepulchre was common in the 12th century (like Temple Church in London or San Vitale in Ravenna). In Christian religious architecture, the base of baptisteries and baptismal fonts is octagonal in order to symbolize “rebirth”, entry into the Christian community and closeness to “God”.

The interior presents the original geometric design rich in “esoteric” influences by the number 8: a dome with an octagonal base and pillars equidistant from each other. The octagonal plan is not only a symbol of the Christian religion and of the union between the circle (symbol of infinity) and a square inscribed within the circle itself (symbol of the finite). The octagon represents the attempt to bring the square closer to the circle, the human to the divine: in essence, the squaring of the circle.

Inside is the tomb of Maria Mancini, niece of Cardinal Mazarin and wife of the viceroy of Naples Lorenzo Colonna, but above all, at an early age, a favorite of Louis XIV, the Sun King.

Another curiosity is the well with the bucket of the twelfth century, which legend says was used by Santa Ubaldesca to transform into wine the water of the well of the church. 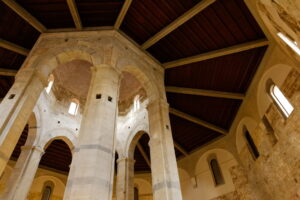