Mentioned in a document of 1201, it is believed to stand on the site of a pre-existing pagan temple dedicated to Saturn. This hypothesis is supported by the atypical aisleless nave with no apse, choir and presbytery.

The chapels and the baptismal font date from a later period. The terracotta façade is enlivened by arches and the portal is surmounted by a round arch. To the side stands the massive belltower resting completely on a column.

Of particular note inside the church are some glazed terracotta statues that were part of an altar-frontal attributed to the Della Robbia school, an unglazed painted Madonna by Andrea della Robbia, a 14th-century painted wooden crucifix attributed to the Pisan school, and a wooden ‘Madonna and Child’ executed by an author of the Senese School. 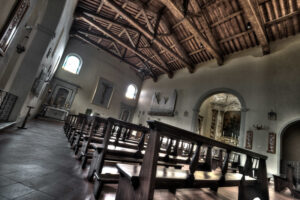 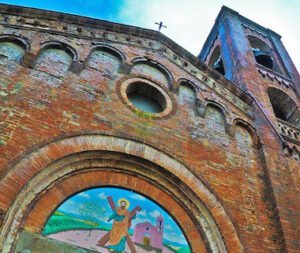