The Church of Santa Maria Assunta became a parish church in the 15th century. It was enlarged and consecrated in 1644. The exterior is characterized by very simple forms epitomizing the harmonious geometry of the typical Tuscan character. The façade features an elegant portal with a broken pediment surmounted by two windows and an oeil-de-boeuf with a fresco depicting Our Lady of the Assumption. The pietra serena chancel and the monumental organ enclosed in a wooden case gilded in pure gold date from the 17th century. Following the transfer of St. Valentine’s relics in 1699, the building was decorated with stuccoes and fine paintings. The interior reveals a propensity for rococo decoration. Particularly worthy of notice is the painted wooden lacunar, dating from 1749.

It houses the Museum of Sacred Art, includeing a large number of sacred furniture in noble metal , dating back to the period between 16th and 19th century .The Museum contains noteworthy works of art, part of the treasure of the parish church of S. Maria Assunta and S. Valentino. The treasure is mostly  composed of candlesticks , chalices , thuribles , monstrances , reliquaries , trays and lamps , produced by the most famous silversmiths of the Lucca , Pisa and Florentine schools in the 17th and 18th centuries .

These furnishings , in large part, were donated to the Pieve after the arrival in Bientina of the relics of St. Valentine. The museum offers a valuable display of liturgical vestments, dating from the late sixteenth century to the end of the eighteenth century , of considerable interest for the value and refinement of the fabrics with which they were made. 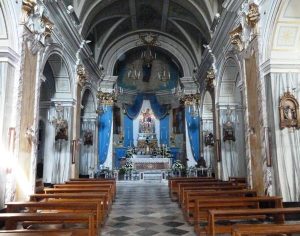 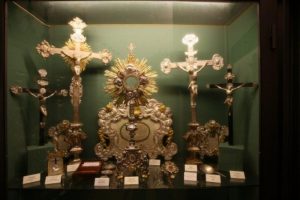