Not far from Monteverdi Marittimo, here is Canneto, surrounded by walls. This village has a peculiar elliptical town planning, with tower-houses and the Pieve di San Lorenzo. The urban development has exploited the walls of the fortress without distorting them, enlarging the loopholes and the guardhouses for windows.

The wild nature of the territory, behind the rugged slope of the Metalliferous Hills, make the village a particularly suitable destination for lovers of trekking and cycling. The woods and the Mediterranean scrub wet by watercourses are the ideal habitat for the typical flora and fauna of the coastal strip.

The birth of Canneto dates back to around the year 1000, but the first settlements are more ancient. Its history is linked to the nearby Abbey of San Pietro and the alternating events of moments of glory and misfortune of the monks. In a panoramic position, it is one of the rare examples of fortified monasteries that have survived to the present day.

The great defensive tower that dominates the bell tower is a testimony to this. The foundation of the Benedictine monastery dates back to 754 and is linked to the figure of San Walfredo, considered the founder of the Counts of Gherardesca. In the eleventh century it acquired considerable importance, but because of the assaults of the Pisan and Florentine troops, the monastery was abandoned in 1561. 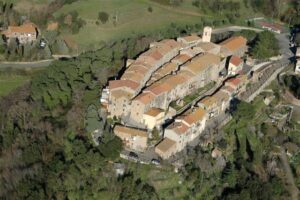