The exhibition in Castelfranco di Sotto intends to promote the archaeological heritage recovered since the 1970s. A section contains exhibits dating from the Bronze Age to the Roman period, including a selection of artefacts, implements and tools discovered on the banks of the River Arno. Another section is dedicated to the Medieval period, when villages were scattered on the plain around the castle. Plenty of space is devoted to the finds discovered in 1995 in the Piazza Remo Bertoncini.

The different periods of the discovery are illustrated by audiovisual material and plaster casts reproducing the medieval brick paving. One last section is dedicated to the 13th- and 14th-century tombs discovered during excavations carried out while restoring the Church of Santa Chiara, now housing the exhibition.

The opening of a permanent exhibition in the theatre of Orentano (a village between castelfranco di Sotto and Bientina) has offered the opportunity to exhibit an archaeological heritage of great interest.
The first section of the exhibition is dedicated to prehistory, chipped stone implements from the Palaeolithic, as well as scrapers and knives. The Neolithic is attested by obsidian implements, by a beautiful dressed-stone axe and by finely executed arrow points. Artefacts dating from the Bronze Age were found in a tiny hut settlement on the slope overlooking the plain. These include ceramic fragments used by a group of shepherds during seasonal stays, and a whole skeleton of a woman who died in 1200 BC. One of the rooms contains finds discovered at Ponte Gini during an excavation campaign: bronze and glass jewels, tools, wine amphorae and fine crockery, all dating from the 11th-5th centuries BC. Intriguing Roman artefacts from a major road and a bridge over a branch of the River Auser (the present-day Serchio) testify to an intense woodworking activity and to the use of mounts. 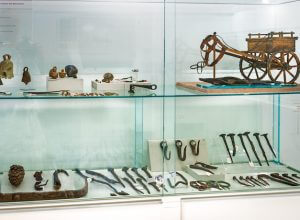 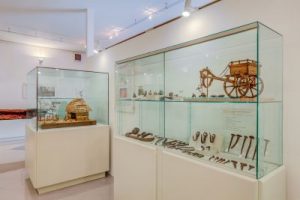 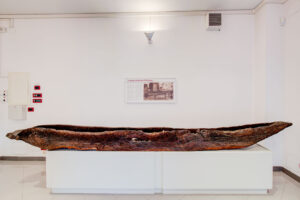