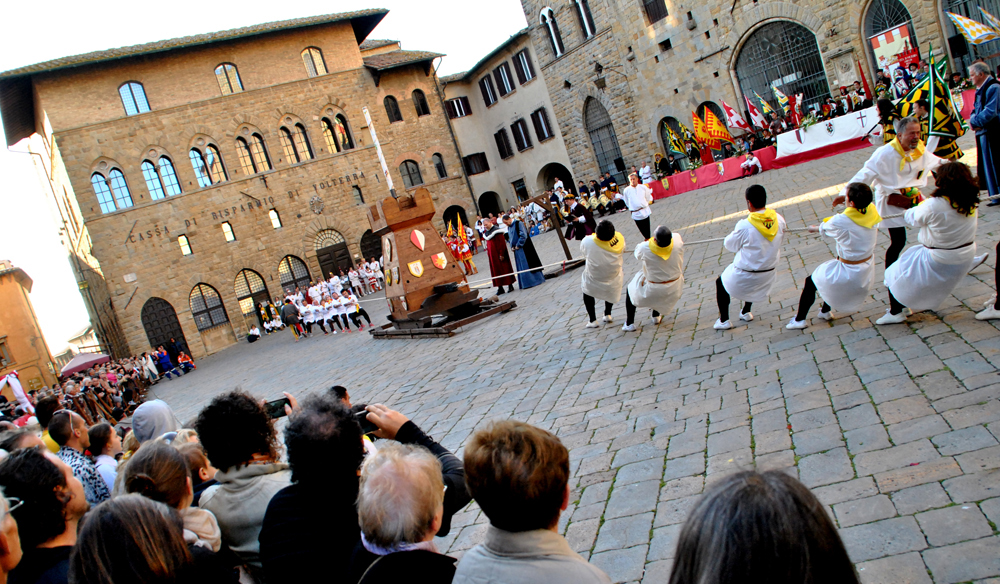 The day begins with the parades of the eight districts that start from different points of the city and meet in the square. After the blessing of the ‘canapi’ and of the tower-like figure where the salt needed to weigh it down was placed (salt coming from the Volterra Salt Mines), the costumed contestants enter the square and the competition begins. Each ‘Contrada’ has a team of eight members, six men and two women, and the teams compete with a series of tug-of-war competitions. The particularity of the “Palio del Cero” is given by the fact that it is not a direct tug-of-war: indeed, the two opposing teams, in addition to pulling the opposing team, have in the centre of the field a ‘tower’ of several quintals to move towards their own field. At the top of the tower there is a taper, (‘cero’ in Italian, hence the name “Palio del Cero”), painted every year by an artist from Volterra, which will belong to the winning ‘Contrada’ together with the white and red flag of the Municipality of Volterra.
The “palio” is preceded by the “weighing of the salt” and the “blessing of the hemp”. The famous Sbandieratori, or flag-wavers, of Volterra will participate in the celebrations.