San Miniato | Museum of the Arciconfraternita

The museum is housed in a large room on the first floor of Palazzo Roffia and consists of a large number of works of art, sacred vestments and devotional objects related to the functions of the Arciconfraternita, which for centuries has been close to the community with work caring for the sick.

One should note the ancient horse-drawn ambulance dating back to the 19th century, or the 18th-century street lamps, still used today for major religious feasts. The collection also boasts precious reliquaries and the precious works of art from the Middle Ages, Renaissance, and Baroque. Among the works on display, the wooden group of the Deposition, consisting of the figures almost at natural height of Christ, the Virgin and St. John (late 13th century). 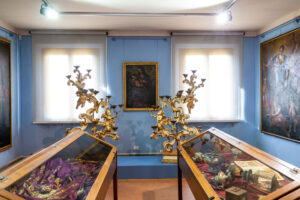 Opening times
All the year, only on reservation