The countryside around Orciano Pisano is among the most immortalized in Tuscany for its variety of colors. Workshops with photographers from all over the world are organized here.

In 2006, the skeleton of a 10-meter long whale that lived 3,000,000 years ago was found in these hills. It is now preserved in the Natural History Museum of the University of Florence.

The origins of Orciano probably date back to the 8th century, thanks to a document that describes a castle called Ursiano. This fortification owes its name to the Langobard family that controlled it. Its history is similar to that of many other villages in the Pisan Hills, which in 1406 passed from the dominion of Pisa to that of Florence, and subsequently became part of the territories of the Grand Duchy of Tuscany.

Almost completely devastated by the violent earthquake of 1846, it is today a small rural center whose richness consists of hills and beautiful relaxing landscapes (among the most beloved and most photographed in Tuscany) crossed by many trails, such as the ring of hills from Orciano to Lorenzana or the lavender fields leading to the hamlet of Pieve di Santa Luce.

The village lies along the Colline Pisane Wine Trail.

The Church of San Michele

In the fifteenth-century Church of San Michele it is possible to admire the copy of a painting by Raffaello dedicated to San Michele Arcangelo.

The church, because of the earthquake, has suffered extensive damage that led to a reconstruction.

Today the building has a neoclassical appearance, but the polychrome marble altar is the original one. 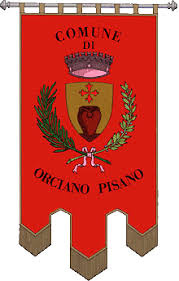