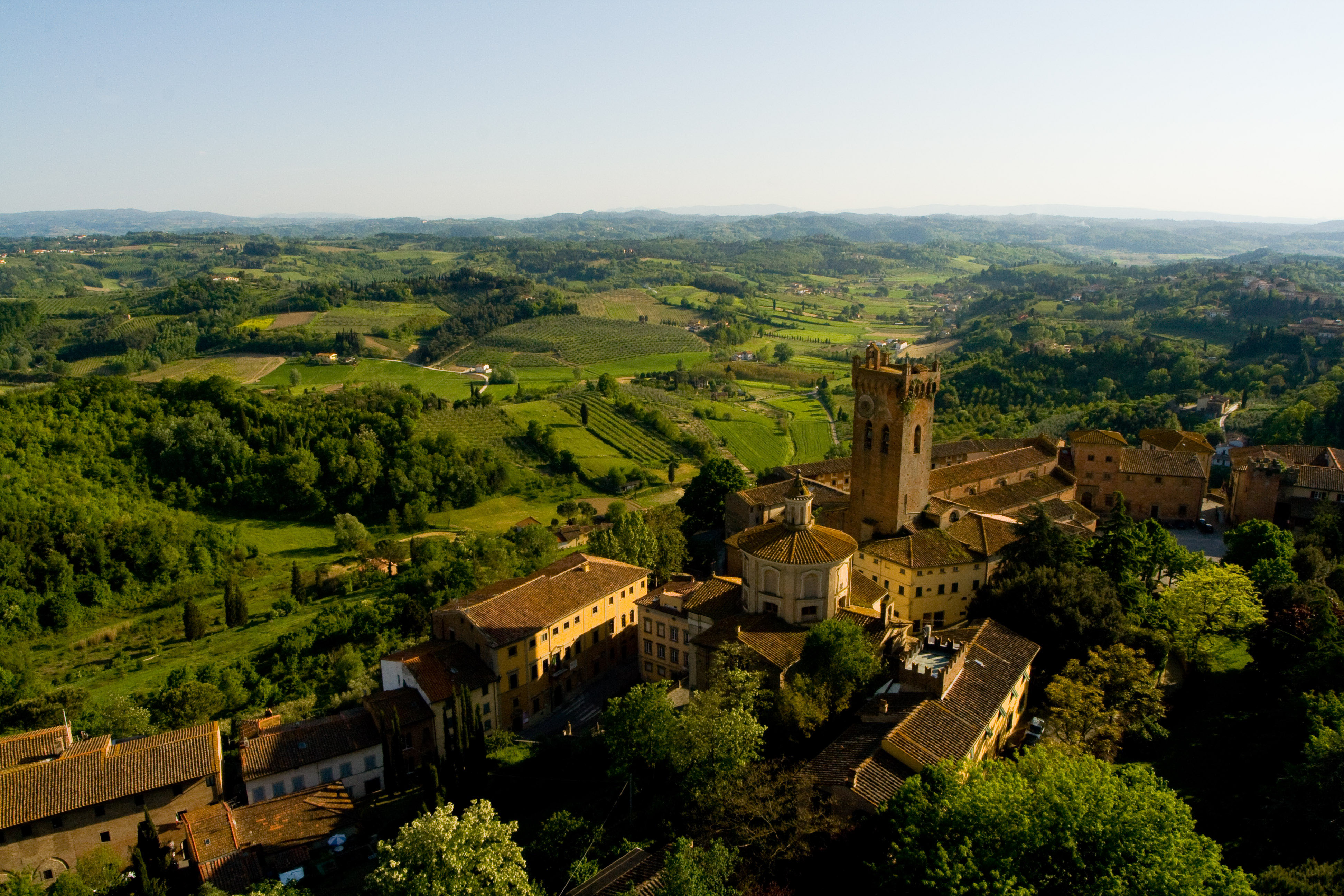 The route along the Pisan Hills Wine Route crosses the territory, from Valdera, Lower Valdarno up to the Val di Cecina, in a typically Tuscan setting, made of a varied and beautiful landscape, dotted with many small unknown rural villages, but easily accessible, even on foot, by bike or on horseback. An itinerary that combines the tasting of wines and other local products, with a visit to monuments and museums of great historical and artistic value. This is the case of the Piaggio Museum in Pontedera, dedicated to the Vespa, a global icon, or the scenario of the Teatro del Silenzio in Lajatico, which in a few years has become a summer event thanks to the concert of its most famous citizen, Andrea Bocelli.

A pleasant itinerary, with a mild climate even in winter, in which the visitor can choose between the possibility of staying in the numerous agritourisms or in the other receptive structures, able to offer a high level of hospitality, extended to the possibility of tastings and purchasing excellent food products. Without forgetting the wide choice of restaurants and trattorias, wine bars and taverns where you can taste the traditional dishes of Pisa and Tuscany, often revisited in an innovative way. Finish the tour in the shops of typical products or simply of foodstuffs, handed down from father to son, where you can breathe the air of the good scents of the past.

Along the Wine Road on the Pisan Hills, quality wines are produced that can be traced back to geographical indications or designations of origin that follow traditional production methods with an eye to innovation. Among those, the wine “Chianti DOCG” (based on Sangiovese and with a lively ruby red color), or the “Colli dell’Etruria Centrale DOC” (white and red), or the “Bianco Pisano di San Torpè DOC”, with a dry and delicate flavor. The DOC Montescudaio is more recent, with its red color and intense odor, without forgetting IGT Typical Geographical Indication wines, with excellent quality wines that reflect the strong link between companies and territory.
The Terre di Pisa DOC was recently recognized in the two versions “Terre di Pisa Rosso” (based on Sangiovese, Syrah, Cabernet Sauvignon and Merlot), and “Terre di Pisa Sangiovese” (Sangiovese with a minimum of 95%).

Defining an itinerary that touches all the municipalities of the Pisan Hills Wine Route is a rather arduous task and could even generate confusion.
We can therefore limit ourselves to throwing down a tour that will not leave you dry-mouthed

San Miniato: halfway between Florence and Pisa, it boasts a historic center that bears witness to an important past. Emperors of Germany, Popes, the Grand Dukes of Tuscany and even Napoleon walked among its streets. From the top of the Rocca, built by Federico Barbarossa, you can enjoy a breathtaking view. San Miniato offers an interesting museum system that includes civic and religious buildings. There’s something for all tastes, including the one for which San Miniato is famous, the white truffle. Don’ miss this specialty, eat comfortably in a restaurant or taste after having tried the experience of a truffle hunt with a truffle hunter and his dog.

Montopoli in Val d’Arno, once a disputed castle between Pisa, Florence and Lucca. The village still shows a medieval urban structure, such as the Arco di Castruccio or the Torre di San Matteo, while the traces of its past can be found by visiting the Guicciardini Civic Museum, or by attending in September the heartfelt tradition of the Challenge with the Arc. Nearby there is the Sanctuary of the Madonna di San Romano, a must for devotees, or the Varramista Farm, today a winery and villa with an Italian garden, in the recent past witnessed love and pains of the Piaggio and Agnelli families.

Palaia: Palaia also has its medieval fortress, or rather its remains, reachable from the narrow winding streets. Must see are the Romanesque church of San Martino and the Church of Sant’Andrea. Nearby, small villages to be discovered: Montefoscoli with the Museum of Rural Life and the mysterious temple of Minerva Medica, the castle-village of San Gervasio, the abandoned ghost towns of Toiano, in the middle of the calanchi, and of Villa Salletta (this last film location of Paolo Virzì and the Taviani Brothers).

Peccioli: from the unmistakable skyline of the bell tower of the Church of San Verano, it presents a gracious and well-kept historic center where several contemporary art installations pop out. It is curious to visit a section dedicated to Russian icons in the Palazzo Pretorio Museum. If you have children do not miss the Prehistoric Park with life-size dinosaur reconstructions, or the urban adventure park “Pecciolo Avventura”.
Nearby, the various hamlets stand out for some surprising curiosities, such as the Giardino Sonoro in Ghizzano, the Astronomical Observatory in Libbiano and the chapel of Benozzo Gozzoli in Legoli.

Lajatico: the country has been on the international chronicles for having given birth to the famous tenor Andrea Bocelli. Here you can see the “Teatro del Silenzio”, a natural amphitheater where “the concert” of Bocelli is held every July, and invites prominent figures from the international music scene to perform with him. But for the rest of the year it remains empty, without stage and audience (hence the term “silence”). Lajatico is a pretty rural village in the vicinity of which is the imposing mass of the Rocca di Pietracassia and the beautiful Villa Medicea of Spedaletto.

Terricciola: is the city of wine for excellence, not only for the presence of numerous and qualified wineries but also for the most important events related to wine: the ‘White Night’ is held on the first Saturday of July, the second Saturday of August ‘Goblets of stars’ and in mid-September the traditional ‘Grape and wine festival’. Here too there are places to visit, such as the Sanctuary of the Madonna di Monterosso, the Badia Camaldolese of Morrona, the Villa Gherardi del Testa and even the Etruscan hypogeum of the Belvedere that recalls the ancient origins of this village where time seems to have stopped.

Lari is characterized by the impressive Castello dei Vicari, whose original layout dates back to the Middle Ages. Former administrative headquarters, a prison as well as a place of torture, today it houses an interesting interactive museum, very suitable for schools and families, which also illustrates some mysteries that still linger in its rooms. Below the castle there are some typical shops and an artisan pasta workshop, that of the Martelli family, which attracts visitors from all over the world to the village. Lari is also famous for cherries: at the end of May the festival dedicated to this fruit has been held for half a century, for which there are about twenty varieties.
Nearby, tiny villages where you can take a walk in contact with nature: Casciana Alta or Usigliano (home to a Museum of Agricultural Activities supplemented by a curious section of cribs from Tuscany and beyond).

Casciana Terme: If landscapes, genuine food and good wine weren’t enough, here is the last option: spas and wellness. The properties of water, already known by the Etruscans, make it ideal for skin care and pathologies such as arthrosis and rheumatism. The outdoor balneotherapy pool, open all year round, is a real joy for children as well as a moment of relaxation for everyone. For those who love a more intimate solution, Villa Borri is able to offer personalized services and treatments in a typical Tuscan villa. There are many paths that start from here and lead to the hills, which can be traveled on foot, by bike or by mountain bike.

Crespina Lorenzana: what distinguishes the two hamlets, now united under the same Municipality, are the postcard landscapes. Crespina is also an important floriculture center specialized in the multiplication of the vine. Here the owls have been bred for centuries and in the center of the town stands a bronze statue dedicated to the night bird.

Fauglia: a small town of medieval origin that had its heyday in the eighteenth century, when beautiful villas inhabited by artists and literary figures were built. Like the Art Nouveau Villa Trovarsi, which owes its romantic name to a play by Pirandello: it seems that the owner, Mrs. Marta Abba was the muse. Also interesting is the museum dedicated to the Macchiaiolo ‘Kienerk’ which, with its chiaroscuro, has immortalized the wonderful surrounding landscapes.

All you have to do now is start, with the vehicle you prefer, along the Wine Route of the Pisan Hills.