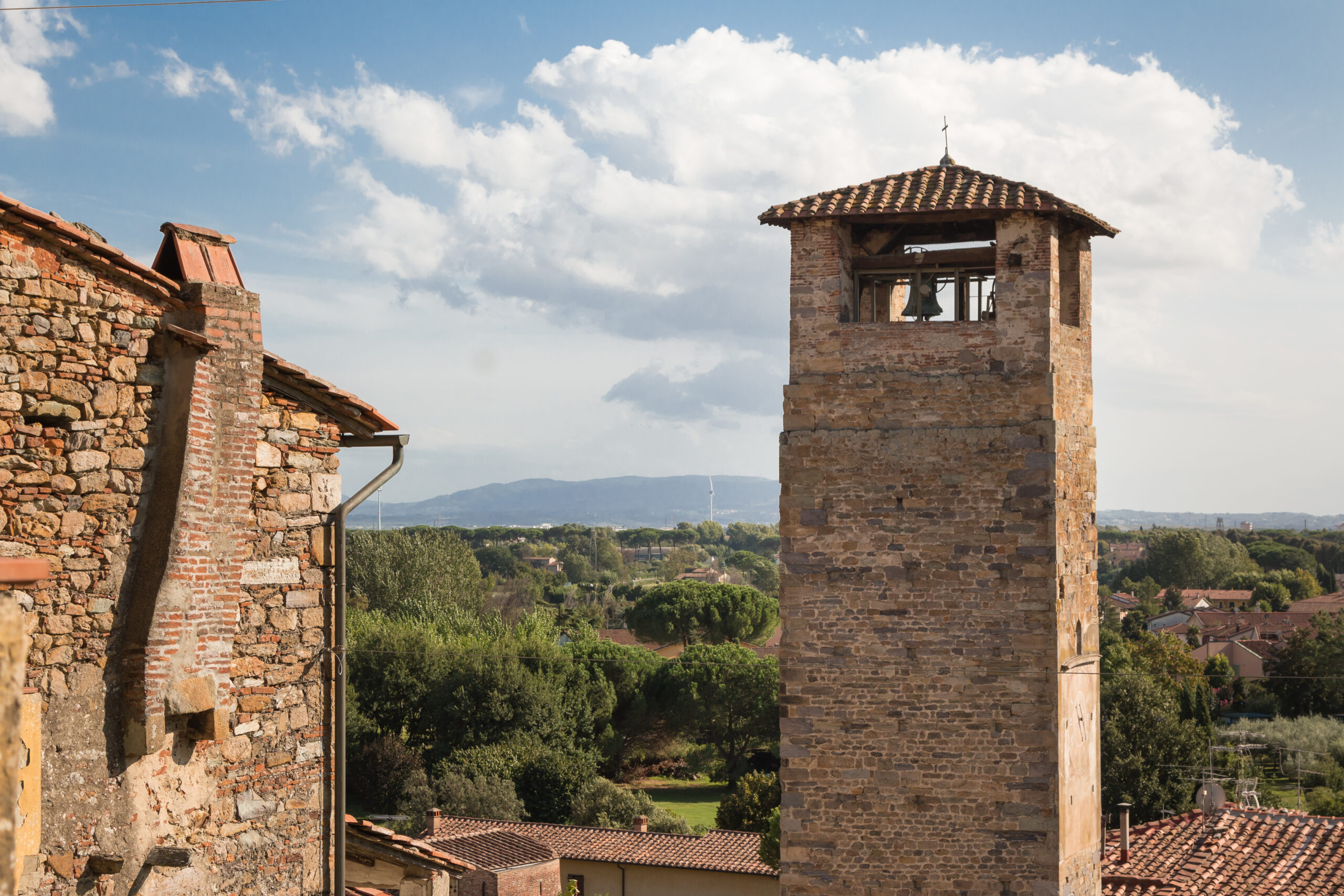 Vicopisano is the ideal vacation and holiday destination for outdoor fun: here you can go trekking, mountain biking, horseback riding; it is possible to venture into the woods to collect mushrooms or chestnuts, to look for officinal herbs or to follow ancient paths. For lovers of geology or mineralogy, for those who want to learn more about the history of the Earth and humankind, the territory of Monte Pisano is a real open-air natural and scientific museum.
Increasingly slow tourism destination, in Vicopisano there is only the embarrassment of  choice to find yourself immersed in a wild and somewhat mysterious environment, where to fully enjoy nature.

See below for details on nature trails.


Info: 050.796581 Vicopisano tourist office
guided tours and initiatives organized by the associations and environmental guides of the territory

Some ideas for walking itineraries, those that the inhabitants of the area do, great lovers of walks up and down the Monte Pisano. If you are a true fan of walking, and you want to join them, you can visit Vicopisano and the whole territory on the occasion of two important themed events: the Walkers’ Festival and Vicopisano Castello in fiore. The Walkers Festival is organized in late March or early April, taking advantage of the first days of spring. Wear comfortable shoes and backpacks on your shoulders, the paths are never trivial and range along the Monte Pisano. An idea for a long weekend out of town. Vicopisano Castello in fiore, in May, is an unmissable opportunity to enjoy the historic center of Vicopisano and the Rocca, colored with flowers and plants, but also for excursions on Monte Pisano in search of edible herbs.

Exploring Monte Pisano, from any slope, in particular along Via della Verruca, you will not be able to help but photograph the characteristic dry-stone walls. Handed down from father to son, the terracing construction techniques are among the oldest, the result of the tradition of people that were able to exploit the resources of its territory. The terracing route offers a full immersion in the local culture of olive growing. In these parts, those who do not have an olive grove, certainly have olive trees in their garden: this is tradition. The route develops along the paths, the mule tracks and the roads that run along and cross the mountain, touching some of the main villages: Buti, Vicopisano, Calci, Agnano and Asciano. As soon as you get hungry, stop and taste the typical products of the area, including local olive oil: famous for its quality, thanks to the particularly favorable environmental factors that make it among the finest in Tuscany.

Path from the Francigena to the sea

The first stage of the route starts from Badia Pozzeveri (near Altopascio), once a safe haven for pilgrims along the Via Francigena, and arrives in Vicopisano through two variants: crossing the territories of the ancient Lake Sesto (6 hours and a half walk, with no difference in height) or, from above, crossing Buti — Sant’Andrea — San Jacopo in Lupeta- Vicopisano (8 and a half hours of walk, 200 m in altitude).
The second stage runs entirely along the banks of the Arno river: from Vicopisano to Pisa (7 hours of walking, with no gradient).
The third and final stage joins Pisa to Stagno (8 hours walk with no gradient) where it is possible to embark on the “Marco Polo” boat for a fascinating journey along the Medici canals, discovering Livorno.

The complete itinerary in the Romanesque area includes several churches and parish churches, located in three hamlets. A smaller and less demanding version is proposed here: from the Pieve di Santa Maria, to the lovely Pieve di Sant’Jacopo in Lupeta, ending with Sant’Andrea in Nocciola. Easy route: an hour and a half walk and just 110 meters in altitude. Alternatively, moving to the Calci side, you can explore the wonderful Certosa di Calci, the hermitages of Sant’Antonio and San Bernardo and, finally, the Monastery and the Church of Sant’Agostino in Nicosia, just below the Monte della Verruca, former fortress of the Republic of Pisa.

Stroll through woods and meadows, without following a path in particular: feel free to lose yourself in the vegetation. Among the edible wild herbs you will find different types of chard, leeks, turnips and wild radicchio. Very good, but more difficult to find: wild asparagus, spotted especially in the area of Mandrie di Sotto. Among the most fragrant herbs we find mint and myrtle, from whose berries we obtain the homonymous digestive liqueur. For a winter vitamin snack, identify one of the numerous arbutus saplings – its fruits, like red meaty cherries, reach their maximum sweetness in November-December – while, in summer, you can pick blackberries. To make a nice bouquet look for heather, resistant and beautiful plants, that show off the most varied colors: from white to pale pink to bright magenta. Among the flowers we also mention the splendid wild orchids, the elder, the mimosa and the highly perfumed acacia. Finally, if you happen to walk through the woods of the Verruca in winter, you will recognize the holly: typical for Christmas decorations but, be careful, the pretty red balls are toxic to humans, while the leaves can be infused to replace tea..

From Noce to Verruca

From the hamlet of Noce, it is possible to reach the Verruca in about two hours (550 meters in altitude). Along the way it is possible to see the Upezzinghi Tower and the marvelous Romanesque Pieve di Santa Giulia. It is interesting to lean over the large quarry above Uliveto Terme with caution. To continue up to the Verruca, you can keep the bumpy cart coming from Caprona or go up diagonally towards the Sotto-Verruca, following a pleasant path between heather and arbutus, ending on the eastern shelves of the castle, near the ruins of the Pieve di San Michele.

From the village of Vicopisano to the Verruca

Starting from the Pieve di Santa Maria, cross the small bridge towards the cypress trees of the cemetery, at the crossroads turn left, in the Ceppato area, and take via della Verruca: a spectacular climb, full of panoramic views of the village, with typical rustic Tuscan stone, dry stone walls, lawns and olive groves. Altogether, up to the top of the Verruca, they are less than 5 km to cover on foot or by MTB.

From the village of Vicopisano to Monte Castellare

From the Colle della Via Crucis, where the church of the same name is located, follow the road on the right that runs along the Fosso della Serezza and the vast fields on which Villa Lotti dominates, unchallenged. On the right, a dirt road that climbs up, winding towards Monte Castellare. A hike of about 30 minutes to reach an enchanting panorama.

How would Jules Verne write: the tour of Vicopisano in five hours. From the village you reach San Jacopo and its homonymous Romanesque church, set in the greenery of olive groves and cypresses, in a typical Tuscan landscape. From here, returning to the asphalt, you reach a medieval hamlet, La Torre, while the road returns to dirt and leads us to the wide ridge of Col di Cincia. Walking along the path 148 of the CAI, with a view of the Valdarno and the Valdera, we reach Le Mandrie di Sopra and the Spazzavento road that descends to the little road to Campo dei Lupi. Take the time to admire the sun reflecting off the sea as far as the port of Livorno. Staying on the 148, one descends into the valley of the Rio Grande, walking beside the stream, pass under the arch of the Molino di Papo, skirting a series of old mills, restored and transformed into villas, which give the name to the valley floor. Another few hundred meters and the ring will be closed, returning to the Pieve di San Jacopo.

From the Castellare di San Giovanni alla Vena to the Rocca di Ripafratta: a complete tour of Monte Pisano.

Very interesting is also this path that reserves, to the most trained legs, beautiful points of interest and natural perspectives. About 35 km long, with a total height difference of almost 2000 m, it involves at least 12 hours of walking, without considering the appropriate stops. Departure from the small church of Castellare (in San Giovanni alla Vena), continue towards Campo dei Lupi, then go up a fragrant thicket and come out in the middle of the ruins of the Abbey of San Michele. Leaving the Rocca della Verruca behind us, the path runs along the back of the mountain from which you can admire the beauty of the Val Graziosa. Crossing through woods, hills and meadows, you come close to Santallago, where you can stop for a sandwich or a typical Tuscan dish. Descending steeply to Campo di Croce, climb to the top of Mount Faeta. Touching panoramic vantage points, such as the crest of the Torretta and the Passo di Dante, you reach the Croci pass, where you start to climb among centuries-old chestnut woods. Here opens the view of the plain crossed by the Serchio. The last stretch of the route reaches the Torre Niccolai and finally the Rocca di San Paolino, long disputed in the frequent struggles between Pisa and Lucca. A steep path leads to the underlying Ripafratta.