Fortresses, castles and views of the Lands of Pisa 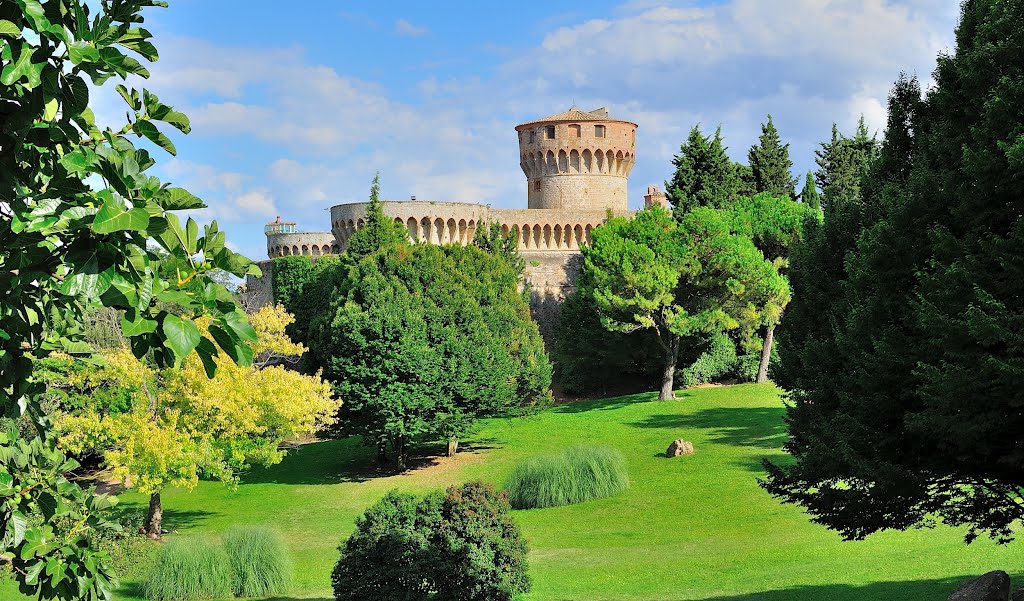 An itinerary in the memory of history that has experienced power struggles, harsh dominations and violent revolts. A past of wars and municipal feuds, of bloody battles between Guelphs and Ghibellines, of fierce rivalries that we find today, in a witty and picturesque form, in local parochialism still very much felt. An itinerary among fortresses, fortified villages and castles that from Monte Pisano reaches Val di Cecina.

A territory, that of the Terre di Pisa, at that time very battered, characterized by defensive systems of which substantial traces remain on the highest peaks, essential for exercising territorial control. Many villages had to surround themselves with walls to protect from the frequent and bloody wars and sieges. We witnessed a gradual shift of the population from low-protected settlements to the most defensible villages in the hills. Some of them have maintained the structures of ancient military buildings, while others have been heavily reworked or have been destroyed over the centuries. In this territory the historical elements do not allow to trace a homogeneous path. However they offer, scattered here and there, testimonies of military architecture that in the period of medieval struggles were of fundamental strategic importance.

The itinerary starts from Monte Pisano, which represented in the Middle Ages a defensive system rich in fortifications, located not only along the border line between Pisa and Lucca, but also within the Pisan territory. Even today, some towers are visible along the Serchio river that served as buttresses to the various castles of the area, which are no longer existing or abandoned, but subject to recovery, such as the Rocca di San Paolino in Ripafratta, open to the public on special occasions.

Departure from Vicopisano, a walled medieval village characterized by the profile of the Rocca del Brunelleschi. Designed by the architect Filippo Brunelleschi in 1438, after the conquer of Vicopisano by the Florentines, it is a magnificent example of Renaissance military architecture. It was considered an impregnable fortress, thanks to an ingenious defense system that allowed to isolate the individual parts of the fortress if they fell into the hands of the enemy. Privately owned, it can be visited every weekend from March 25th until the end of November.
In the historic center of Vicopisano you can admire with a pleasant stroll 13 medieval towers, including the Clock Tower, the Tower of the Four Doors and the Tower of Relief. The latter will soon be open to the public, thanks to the patrol walkway that will connect it to the Rocca.

Second stop San Miniato, on which stands the Tower of Federico II, 38 meters high and symbol of the Municipality, open to visits all year round. Built by Frederick II Barbarossa in the 13th century, when he chose San Miniato as an imperial seat in Tuscany, thanks to its strategic position. The city is in fact equidistant from Pisa, Lucca and Florence and stood near the Via Francigena. The tower was infamous as a place of detention for political prisoners. There, Pier delle Vigne, secretary of the Emperor, was imprisoned and blinded, and quoted by Dante in the Divine Comedy.

Nearby, there are two villages and ancient medieval castles that still retain clear and interesting traces of their past of wars. The first is Santa Maria a Monte, from the curious spiral urban layout that seems to have influenced even Leonardo da Vinci, the second is Montopoli in Val d’Arno with the Arch of Castruccio (from the name of the Lucca leader Castruccio Castracani) and the Tower of San Matteo, symbol of Montopoli, near the Guicciardini Civic Museum.

We move among the gentle Pisan Hills for the next but significant stop: Lari, city of the cherry, which presents itself with the imposing Castello dei Vicari. The fortress, built by the Pisans in the 11th century, had experienced its greatest splendor after the fifteenth century with the Florentine Vicars, who administered much of the current province of Pisa up to the Kingdom of Italy. In the square stands the Palazzo Pretorio with the façade covered by the numerous coats of arms of the podestàs. Going down into the jails, into the dungeons and into the Torture Room, you have an idea of what it meant to be locked up in this fortress, that looks impregnable from the outside. The Castle is open all year round and offers a multimedia educational path suitable for schools and families. So, as not to miss anything, it is a location for weddings and events.

Next stop is the Rocca di Pietracassia, accessible from the street that from Lajatico, a pretty medieval village and birthplace of Andrea Bocelli, leads to Orciatico. Along the road there are also two ruins of windmills (one has been restored). From here you can enjoy a remarkable panorama of woods and green hills up to the unmistakable bulk of the Rocca di Pietracassia. It is located over 500 meters high on a huge limestone boulder: from a slit open on this boulder it seems to derive its name (Cracked stone or split stone). Abandoned for centuries is considered one of the few examples of late Lombard architecture in Tuscany. The oldest nucleus is the sighting tower in the highest part. To reach it you have to leave the car and walk along a path, but the view undoubtedly pays for the effort. On sunny days, the view can range from the mountains of Amiata to the promontory of Piombino.

Next stop Volterra. In the ancient Etruscan city, also famous for the processing of alabaster, the Torre del Maschio was recently opened to the public within the Medici Fortress. Since its construction in the fifteenth century, at the time of Lorenzo the Magnificent, the fortress was used as a prison and is still the site of a security prison. After more than five centuries, the public can now visit the Torre del Maschio (from April to November), thanks to the recent renovation that has enhanced its architectural beauty.
In the wonderful setting of Piazza dei Priori you can also climb the Tower of the Palazzo dei Priori, open to visits all year round. The Palazzo dei Priori is the oldest municipal building in Tuscanyand was chosen as a model for Palazzo Vecchio in Florence. From the top of the pentagonal tower, which overlooks the building with two crenellated shelves, you can enjoy a breathtaking view of Volterra and Val di Cecina. In Volterra do not forget to enter one of the alabaster shops to watch the “light stone” work and maybe bring it home as a souvenir.

And the Val di Cecina is the last stop on our itinerary. Close to Pomarance, the Rocca Sillana stands out imperiously, isolated on an impervious hilltop and surrounded by thick bush. It is a site rich in history, densely inhabited in the Middle Ages, which controlled a vast territory. The tradition derives the name from the Roman general Silla who besieged Volterra. It is possible instead that the name derives from the Latin “silvanus” or “woody”. The excavation inside the Tower has unearthed ceramic material, arrowheads, fragments of glass and a sword, which are exhibited in a room of the Permanent Exhibition of Warriors and Craftsmen in Pomarance. The Rocca is accessible only on foot, and every year guided tours are organized during the summer by the Volterra Tourist Consortium.