Dante in Pisa: places and characters of the Divina Commedia 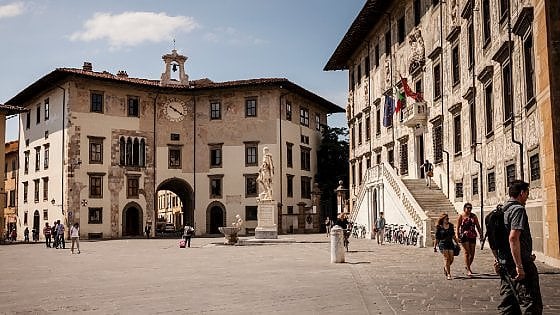 Pisa has always been seen as a hostile city to the poet Dante, beacuse of the hard and severe verses (79-84) in the 33rd Canto of the Divina Commmedia. Here Dante rails against Pisa wishing a punition by the neighbouring cities and a flood by the river Arno. On the contrary, Dante has lived four years in Pisa, where he also wrote “De Monarchia”, a work in Latin language.

The setting of the Canto is the 9th level of the Hell where Dante meets the Count Ugolino Della Gherardesca who was one of the most influent leaders of the Pisa Republic at the end of the 13th century. As a  ship Comandant he was accused of high betrayal in the sea defeat of Pisa against Genoa and for this reason imprisoned with his four sons in the Torre della Muda in Piazza dei Cavalieri. The present Tower is easily recognizable because of a clock on the facade. The name “Muda”is connected by the fact that here the eagles of the Pisa Republic were locked during the molting. A small tombstone on the facade reminds the sad event. Dante wants to show what evil and hate can do in the human soul: a father forced to see his sons starve without giving them any help or  consolation. This is the worst Hell.

The terrible flood that Dante invoked ought to be caused by the barrier of the two small islands of the Tuscan archipelago (Capraia and Gorgona) at the mouth of the river Arno. In that time there  was no village because the sea was closer to Pisa. Nowadays, at the Arno mouth, we find the seaside resort of Marina di Pisa, only 12km far from the city. It is worth coming here to see where the river Arno flows after 240km across Tuscany, including Florence. You will be astonished by a beautiful skyline of the San Rossore Park, the Pisan Mount and the Apuan Alps in the distance. Here you find a marina, an outdoor adventure park, many buildings in Liberty style along the sea promenade protectd by rocks barrier with bathing establishments and restaurants serving fish dishes.

Leaving Pisa towards the Pisan Mount “because of that, Pisans can’t see Lucca”  you can see a tower perched on a rock overhanging the village of Caprona. It is the 19th century restoration of  the Medieval Upezzinghi Tower which controlled the plain from the attacks of the enemy against Pisa. It is mentioned in the 21st Canto of the Hell in the Divina Commedia, when the Pisan garrison surrendered after a long siege and were frightened to see the huge number of the Florentine soldiers, among whom Dante himself.
Not far from here, do not forget to visit the wonderful Charterhouse of Calci and the nearby Museum of Natural History, nor the medieval village of Vicopisano boasting 13 tower houses and the Brunelleschi Fortress, again a witness of the long wars between Pisa, Lucca and Florence.

Last stop San Miniato, on the way to Florence. In the 13th Canto of the Hell, in the suicides wood, Dante meets Pier delle Vigne, important lawyer and respected counsellor of Federick the Second. He was accused of betrayal against the Emperor, jailed and blinded in the present Rock dominating the old town. It is said that he committed suicide throwing himself from the top of the tower. San Miniato is known as the town of two Emperors: Frederick and Napoleon. The former had chosen San Miniato for its strategic position which allowed a control on the commercial routes and the pilgrim route (Via Francigena) as well. Along with the Torre Matilde, the present belltower of the Cathedral, it represented the only remain of the former imposing Medieval fortress, still visible inside the Church of San Francesco or even in the Vatican Corridors in Rome. 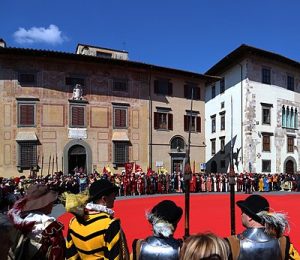 THE MISTERY OF THE TORRE DELLA MUDA:

Nobody has ever known what really happened inside the tower. Historic documents report that when the door was open the corpses were all chewed by mice. Nonetheless, rumors passed from mouth to mouth becoming legends. It is said that the Count had eaten (or chewed) his own sons before dying.  The final verse of the canto ” after, more than the pain, the fasting could” is one of the most enigmatic of the whole poem. It seems that Dante himself wanted not to reveal the mistery of the death of the Count with his four sons. Did he really chew the bodies of his sons or did he also die suffering hunger and pain ?