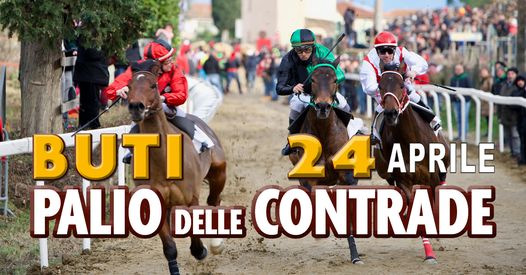 The palio takes place every year in January on the Sunday following the 17th, the day of Sant Antonio Abate, protector of animals. The 2022 edition will exceptionally take place on Sunday 24 April.

For 60 years Buti’s main folkloric event has centred on a horse race led by jockeys from the seven contrade (districts) who compete in a race whose setting is the access road to the town.

Together with the Palio of Siena and Asti, it is among the oldest in Italy and chronologically the first palio in Tuscany. A historical costume parade has recently been added to the race.

Like every Palio, the current version of the Palio of the Contrade di Buti, which dates back to 1961 but has roots in horse races dating back to 1848, involves the entire population.

It is advisable not to limit oneself to being a mere spectator of the race, but to follow every detail of an authentic ritual that begins a few days before with dinners in the contrade, useful for warming up the atmosphere among the contradaioli, with a spectacular historical parade that echoes the ancient, noble past among ladies, knights and notables.