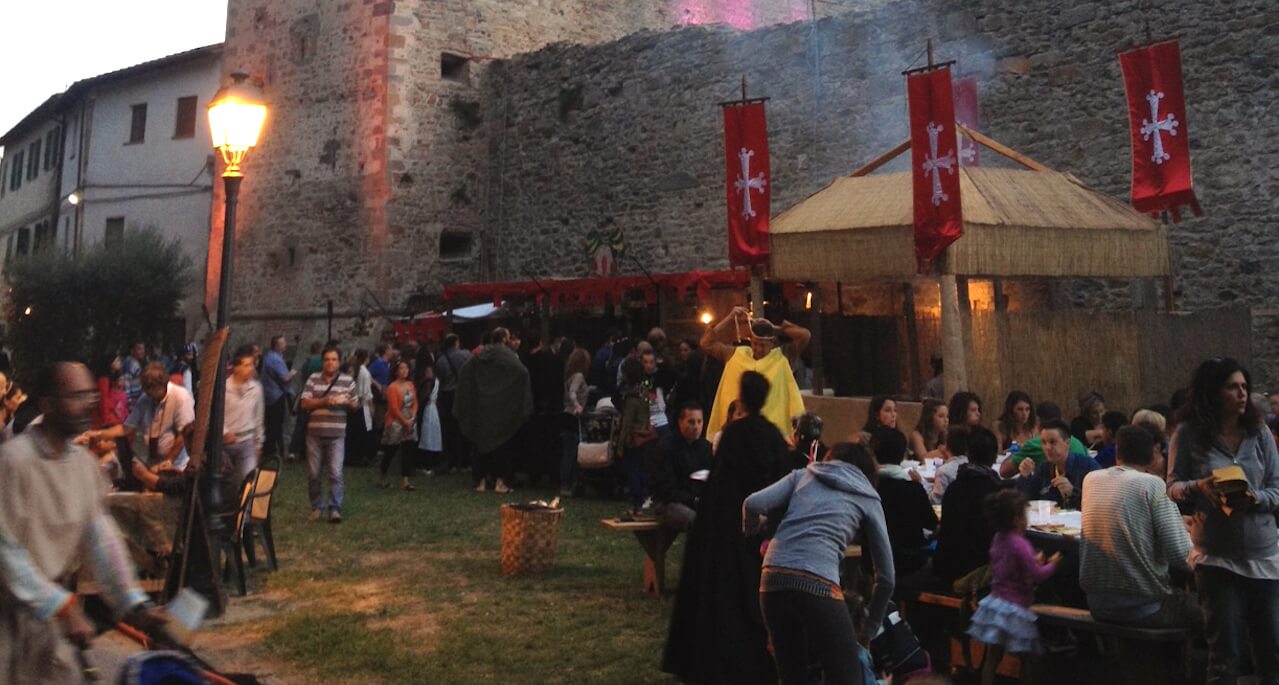 An authentic community event, just like in the Middle Ages, when during festivals, whether they were for religious reasons or for the positive outcome of a war, or for the marriage of the local lord, the entire population of the town was involved. The Medieval Festival of Vicopisano, inaugurated in 1996, does not celebrate a specific event but pays homage to an illustrious past that between the Middle Ages and the Renaissance saw this ancient castellum (small Roman fort) flourish and become a small town, strategically important at first for the Republic of Pisa and later for the Grand Duchy of Tuscany. A festival where the ludic and recreational aspects become the focus around which to imagine and reinvent, but always using reliable and philologically credible sources. An atmosphere that allows the participants to identify themselves with the epic/chivalrous tradition that is such an important part of our collective imagination, with ladies, knights, notables, Lords, soldiers, musicians, jugglers, craftsmen, inn keepers that take part in a theatrical setting where every minute detail has been meticulously researched. All the clothes, for instance, are woven on looms and hand sewn by the expert hands of local seamstresses and copied from ancient models found in paintings, codexes or written documents, that help to make the costumes historically accurate.

Read more and see programme below…

We leave the car in the carpark outside the old town and after a few moments we step into a fascinating setting. Many shops in the historical centre have been transformed into artisanal workshops, with the master craftsman carrying out his work in the street, or into inns, with the innkeeper serving simple rustic food on wooden platters. While watching a ceramic worker at the wheel we catch a fleeting glimpse of jugglers and fire eaters performing; further on we see a demonstration single combat duel between knights from different factions: then we find ourselves in an alleyway where there is a woman dressed in an ample heavy skirt, sitting on a wooden stool busy weaving a basket, and we just about manage to avoid being run over by a merry group of musicians playing a Medieval saltarello (leaping-step dance) with zufolo (type of flute), ghironda (hurdy gurdy) and ribeca (rebec) the most common musical instruments of the time.

Then down there, right under the imposing town wall, above which the Brunelleschi Fortress towers, a military encampment is spread out with soldiers busy sharpening their weapons, cleaning their armour, grooming their horses and checking the harnesses for the attack they will have to face and repel the next day. Towards evening, at the top of the hill, where the all the politically important buildings are, in the square opposite Palazzo Pretorio, you notice a scurrying of damsels preparing the tables for the grand banquet for the notables. The menu presents us with a perhaps not too philologically accurate but certainly fun list of dishes, such as Abundantia de fructis, Panem et Rinfuso, Panem cum Lardum, Dulcis de conubium. A quintessentially Tuscan take on flavour with a touch of irony.