Days of the Etruscans 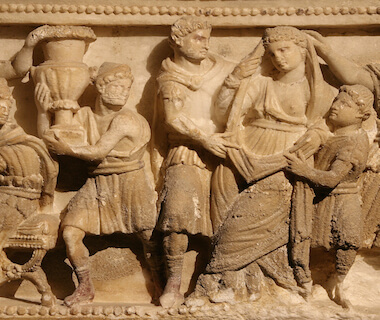 The Day of the Etruscans is generally celebrated on August 27 to commemorate the conferral of the title of Grand Duke of Tuscany to the Duke of Florence Cosimo I, which took place on August 27, 1569 with a papal bull by Pius V. That title placed Cosimo I and his successors at a level of prestige that no other Italian prince could have boasted, officially extending their rule from the city of Florence to the territory once belonging to the Etruscans.

Saturday 17 September and 24 September 2022, 4 p.m. : Museo Etrusco Guarnacci, via Don Minzoni, 15
Workshop/Concert “Etruscan Soundscapes in Volterra”.
This is a performance of art, research and musical archaeology in which musical instruments of the Etruscan sound world are used, reconstructed following the iconography of the period and the study of some finds. The second event is the archaeology workshop ‘What shall I wear? A journey through the history of the clothing of Etruscan ornaments’. The activity will be divided into a first phase of a guided tour of the Guarnacci Etruscan Museum themed around the content of the meeting, and a second phase dedicated to children with the possibility of experimenting with jewellery-making techniques like real craftsmen and then wearing clothes woven according to the Etruscan style.

Sunday 25 September 2022, 10 a.m. – 7 p.m. : Buti, Piazza Garibaldi
An Etruscan workshop plans to set up a series of Etruscan workshops in Buti’s Piazza Garibaldi. The aim will be to show what the particular workmanship of the time was like. The spectators will be able to see some experts perform these techniques and, under their guidance, try their hand at making them themselves. The aim is to acquaint visitors with the history of the Etruscan people from a slice of everyday life.