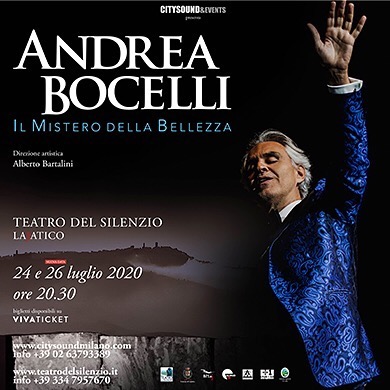 The 15th edition of the concert-event “The mistery of beauty – Il mistero della bellezza” by Andrea Bocelli at the Teatro Del Silenzio, the exclusive event that takes place every year on the hills of Lajatico between Pisa and Volterra, doubles the date!

Andrea Bocelli is the absolute protagonist of this show, landlord and honorary president of this supreme event, in the natural amphitheater in the hills of Lajatico, his birthplace.

Teatro del Silenzio previous shows  : Andrea Bocelli presents the concert in the wonderful setting of the Theatre of Silence in Lajatico, his birthplace. Since 2006, the spectacular natural basin has welcomed leading artists such as Laura Pausini, Noa, Lang Lang, Nicola Piovani, Placido Domingo, Toquinho, Zucchero, Elisa, José Carreras, and Katherine Jenkins. Not only music, but also a stage for dancing: indeed, dancers like Roberto Bolle and Eleonora Abbagnato have performed here. And figurative arts as well, with artists such as Igor Mitoraj and Arnaldo Pomodoro who have dedicated their works to various shows that took place here. The “Teatro del Silenzio” comes to life among the picturesque hills of Lajatico, a small jewel in the Volterra countryside, which remains intact and in perfect harmony for the rest of the year. The structure of the theatre is set up specifically for the event and dismantled immediately after the show, in order to return the hill to its natural look.