The salt mines of Volterra have been cultivated since the time of the Etruscans, and have always been considered an important resource for the territory. They are documented as early as the Middle Ages (XII century) as the first center of salt trade in Tuscany.

When Volterra fell under Florence (1472) the natural resources of the territory were directed along the road Volterra-Valdelsa-Florence, called “Via del sale“, which would later become one of the most important commercial axes of the Grand Duchy.

Saline di Volterra spreads on an area of 65,000 square meters divided in 10 buildings. Today it produces about 150,000 tons per year of crystallized salt twice destined for the production of tablets and for the agro-food industry. With a minimum purity of 99.99%, it is the purest salt in Italy.

Today the plant can be visited, accompanied by a cultural and curiosity exhibition that traces the history of the Saltworks, from the State Monopoly to the stories and testimonies of the men and women who have worked in this place, up to today, when the Saltworks rediscovers its identity and lives the contemporary reinterpreting itself.

– the salt waterfall in the pavilion designed by Pier Luigi Nervi
– the Salt Museum and video projections
– the Salt Emporium
– Art Space: salt becomes a material to be shaped, with the experimental works of contemporary artists (during the exhibition periods) 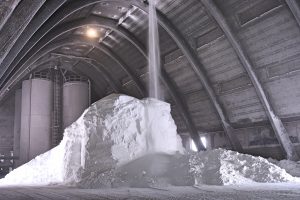 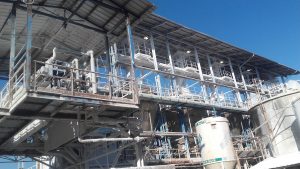