Environment, experience and tradition are the essential ingredients of this cheese produced since the eighteenth century and that in 2015 obtained the DOP (Protected Designation of Origin), while recently was established the Consortium of “Pecorino delle Balze Volterrane PDO” of which local companies are part

The production area includes Volterra, Pomarance, Montecatini and Castelnuovo, and Monteverdi Marittimo. It is in this area that small farms run by passionate entrepreneurs heat sheep milk, added with rennet or vegetable coagulant obtained from wild artichoke. Then the cheese paste is placed in containers (fuscelle) and dry salted.

The seasoning takes place in cool rooms, for a period that can vary from a minimum of two months to a maximum of over a year. During this period the surface of the cheese is treated with wood ash, olive or holm-oak ash: it is a fundamental moment to make the rind of this pecorino unmistakable.

Depending on the period of aging, the Pecorino delle Balze is distinguished in fresh, semi-aged, aged, and “da asserbo”. The use of vegetable rennet makes it ideal for vegetarians as well. A cheese, in short, that can satisfy all palates and goes very well with fresh fruit and honey. 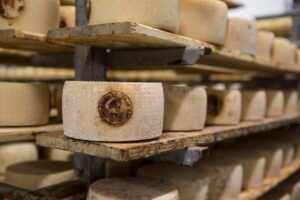 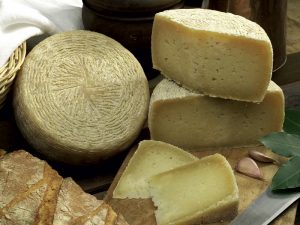