On reservation all the year for a minimum of 20 people with at least 7 days’ notice.

The imposing bulk of the Medici Fortress, which dominates Volterra and characterizes its profile, was built in 1474, two years after the conquest of the city by Florence at the end of a bitter war for the control of alum mines, a mineral used in the manufacture of textiles.

The Fortress was not only intended to protect the city, but to keep it under control by preventing any rebellion.

It is made up of two military structures: the Rocca Antica (Old Fortress) and the Rocca Nuova (New Fortress), joined together by a double curtain surrounded by a patrol path.

The Ancient Fortress (called the Female) of semi-elliptical shape and situated near Porta a Selci includes parts of the oldest fortification made visible by recent restorations.

The New Fortress, built by Lorenzo de Medici, is constituted by a large square of stone whose corners end in ramparts among which the circular and massive tower of the “Mastio” stands out.

From the beginning it was used as a political prison: in its cells were locked up the opponents of the Medici and the patriots of the Risorgimento.

Today, thanks to the recent renovation, the Mastio Tower is open to visits while the Fortress is still a prison and therefore inaccessible to the public. 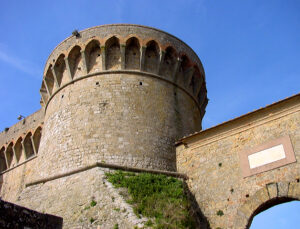 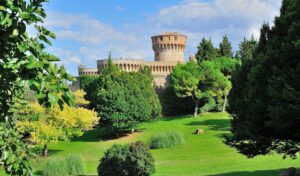