San Miniato | The “Via Angelica”

Opening time
all the year on reservation

On Piazza del Popolo, to the left of the Church of San Domenico, a small wrought iron door transports the visitor back in time: it is the Via Angelica. The name should not mislead because it was actually the ancient path used by peasants that joined the city to the countryside and represents one of the most evocative places of San Miniato

Three environments that show wonderful frescoes and decorations: they are respectively the church of Santi Jacopo e Lucia, the Oratorio di Sant’Urbano and the chapel of San Pietro Martire (called Aula Pacis).

The first environment shows a beautiful crypt cross with remains of frescoes, the second a surprising wealth of decorations and frescoes. Here the affiliates of the company of Sant’Urbano, called “of the whip”, used to meet. The wooden crucifix of the saint was the object of veneration against the natural calamities that damaged the fields. Going down to the third room, the chapel of San Pietro Martire, with portions of a cycle of frescoes of the fourteenth century.

The Via Angelica is part of the Museum System of San Miniato. 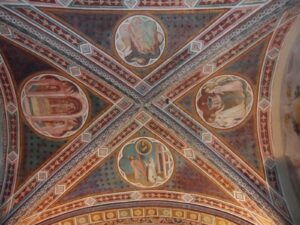 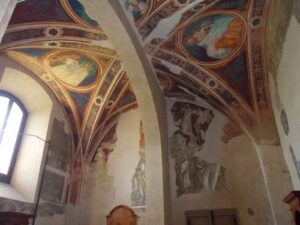