The monastery dates back to 1226. For centuries it was inhabited by the Clarisse nuns, until it was transformed into a conservatory for the education of young girls during the Napoleonic period.

Since the ’90s the Conservatory hosts the Museum of Santa Chiara which houses works of great artistic value as the great table with the Immaculate Conception, by Iacopo Chimenti said Empoli in 1596, of the Florentine school. Other works include two painted crosses from the 14th century and the “Noli me tangere” by Ludovico Cardi, known as Cigoli.

The collection also consists of liturgical furnishings, reliquaries including one donated by the Bonaparte family in the 18th century in ebony and ivory, as well as artistic artifacts brought as dowries by the young girls who took the veil, but also beautiful works of embroidery made by the nuns themselves.

The Museum, in Via Roma, 15, is part of the San Miniato Museum System. 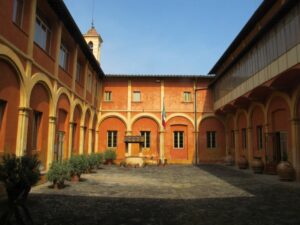