The church of S. Michele degli Scalzi (12th century) was assigned to the Order of the Benedictine monks from Pulsano, who followed very strictly the “rule”: they did not eat dairy products or drink wine, they carried out only manual activities but not study, they dressed in rags and did not wear sandals or other footwear. For this reason they were nicknamed “Scalzi – barefoot”.

Due to a subsidence of the ground, the bell tower is inclined towards the river. It is known as the “third leaning tower“ of Pisa (after those in Piazza dei Miracoli and the Church of San Nicola). The bell tower has a square base, in marble in the lower part and in bricks in the upper part, with orders of windows that mix single, double and triple lancet windows.

The façade is divided into two orders: on the lower part in marble stands out the portal with the images of the Cristo Pantocratico (original preserved at the National Museum of S. Matteo) of the early 13th century. On the left side is the cloister of the monastery, part of which at the end of the nineteenth century was included in the ceramic factory Richard Ginori, of which only a large chimney remains.

The former monastery, now restored, is home to the SMS cultural centre.and the Municipal Library. 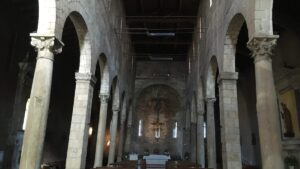 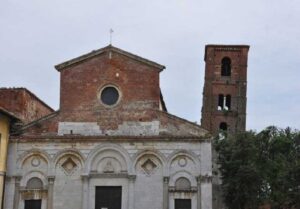