Opening time
only on reservation

The Bell Tower was built in 1885 by the architect Luigi Bellincioni, author of seven other bell towers in Valdera and Val di Cecina. The tower is the result of an intervention of remaking and raising of the previous tower. From the height of 42 metres of the campanile, built in Selagite from the quarries of Montecatini Val di Cecina, you enjoy a magnificent view over Valdera.

The structure occupies an unusual position with respect to the parish church: in fact, it is not located near the façade but behind the apse so as to assume a frontal position with respect to the Praetorian Palace (seat of the Municipality) so as to accentuate the difference in the same square between political and religious power. The parish church has a Romanesque facade with five blind arches (XI century). Inside, with three naves, was added the chapel of the Assumption, which now houses the Museum of Sacred Art.

Verano was a French hermit who in the 6th century A.D. undertook a journey to Rome, following the “Strada Peregrinorum” which would later become the Via Francigena. The “Legend of Verano” lists numerous miracles that the Saint worked in various places, in addition to his activity of conversion of the pagans for which he is often depicted while subduing a dragon. He is the patron saint of Peccioli, which solemnly celebrates his feast day on October 25th. 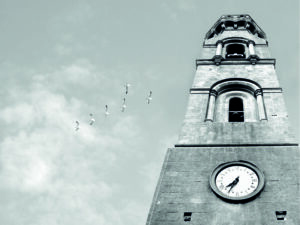 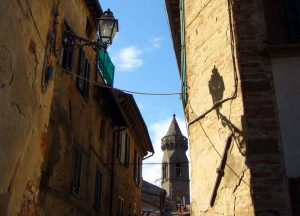 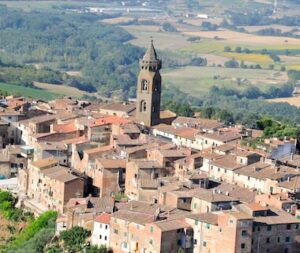 Tickets
free admittance
Entry to minors is allowed only if they are accompanied by adults.