The brick building alternates Romanesque and Gothic features, even though it was restored in the 19th century. The façade, built in stone and not in bricks, is pierced by three portals and decorated by numerous small arches.

The spacious interior is divided into a nave and two aisles by pillars supporting round arches. The raised presbytery opens onto three chapels and a semidecagonal apse. Worthy of note is the stone baptismal font, coming from the old church of Santa Maria in Ripezzano, near Palaia, destroyed in the first half of the 17th century.

The church, just outside the village, is the venue of important musical events, such as choir festivals. 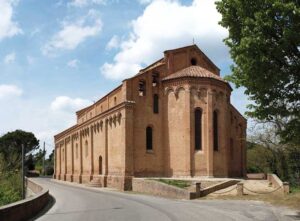