The Museum intends to promote the cultural, artistic and architectural heritage of the area. Special attention has been given to local history, to the collections acquired and  donations received. The museum is the first element of a network including the San Matteo Tower, the Church of Santa Marta, the Documentation Centre of Marti  and the Museum of the Shrine of San Romano.

The setup in the Palazzo Guicciardini consists of five exhibition rooms on the ground floor, two large spaces in the basement, a reception area providing services to the public. Rooms on the ground floor have already been partly set up with an archaeological section, an exhibition of finds from the fortress, and a section dedicated to the history of production activities.

The first section contains the Majnoni Collection, formed by miscellaneous exhibits of Etruscan, Roman, Longobard and Medieval origin, the Baldovinetti Collection, chiefly consisting of Etruscan terracotta items, and the Falchi Collection, showing items and documents from the archaeologist’s collection.

Rooms 3 and 4 are dedicated to the former imposing Castle of Montopoli. They preserve decorations from the vault and walls, containing finds and documents on the excavations. The large room dedicated to the Milani Production houses the most significant collections of terracotta plates and vases. 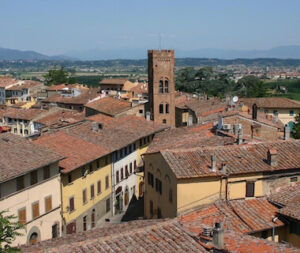 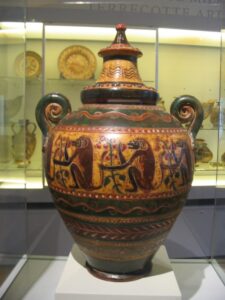