The beautiful Pieve dei Santi Ippolito e Cassiano is located in the hamlet of San Casciano, along the banks of the Arno river, between Cascina and Pisa. It represents a harmonious example of church in Pisan Romanesque style.

Already documented in 970 on the foundations of a previous building, it was restructured at the end of the twelfth century with stones verrucane (ie from Monte della Verruca) and decorated with important architectural sculptures in the lower part of the facade.

The masterpiece are the three architraves over the respective entrances, especially the central one by Biduino depicting the Resurrection of Lazarus and the Entrance to Jerusalem, accompanied by two inscriptions bearing his signature and the date 1180. Biduino was also the author of the sculptures in the Cathedral of Pisa).

The interior has a basilican layout with three naves divided by 12 columns and 2 pillars, with a semicircular apse and a wooden trussed ceiling. It preserves an ancient baptismal font, in a simple octagonal shape, probably dating back to the 11th century and a terracotta of Andrea della Robbia’s workshop depicting the Baptism of Jesus, with bright and vivid colors.

Besides the imposing crucifix of the high altar, the church preserves two big wooden crucifixes of the 16th century by an unknown author 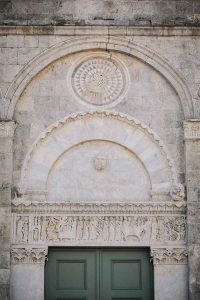 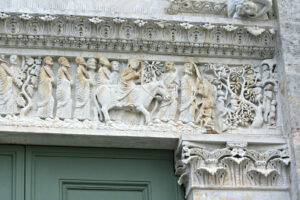 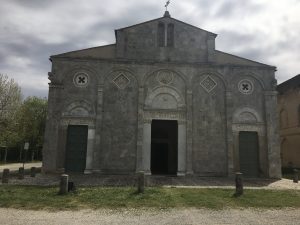