The church, one of the oldest in Pisa and built on a pre-existing temple dedicated to Mars, is mentioned for the first time in 1016 as a Benedictine monastery, before passing to the Camaldolese.

The current building is the result of a series of changes also determined by events such as the restructuring after the earthquake of 1846 and the bombing of the Second World War that gutted the church saving only the marble facade, one of the most spectacular in Pisa, showing three portals and the writing of the early 17th century that refers to the election of the Rector of the University.

The interior houses a 14th-century crucifix attributed to Nino Pisano, as well as frescoes and paintings from the 13th to the 18th century. The high altar is built over the twelfth-century crypt (not open to visitors).
Archaeological excavations have brought to light a brick road and the structures of the monastery of the late thirteenth century, a well of modern age and ten silo used to store grain. 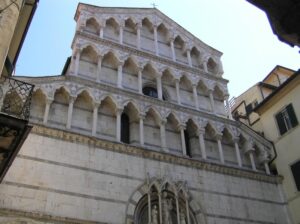