The church, currently under restoration, is recognizable for its high bell tower, which rests on a suspended arch, and for the large glass windows (1345) partly the result of restoration of the twentieth century to which participated one of the protagonists of the Italian Liberty style, Galileo Chini.

The first documents of a church dedicated to S. Francesco dates back to 1233. The financial difficulties distracted the city from carrying out the work on the church, completed in the Medici era. The best Italian painters of the 13th and 14th centuries worked on the church, from Giunta Pisano to Cimabue, from Giotto to Spinello Aretino. Some works, including two paintings by Cimabue, were stolen during the Napoleonic occupation and exhibited at the Louvre Museum.

The façade, interrupted at the first order, does not let you guess the majesty and richness of what is inside the church. Beginning with the tomb of Count Ugolino: a plaque in the second chapel on the right recalls that the bones of Count Ugolino della Gherardesca and his family were buried here, to be transferred to the adjacent cloister after the dismemberment of the tomb. Having died as a traitor, the Count could not be buried with his family in the monumental family tomb inside the church.

In addition, the Sala del Capitolo, or Sala di San Bonaventura, where the saint is said to have presided over the general chapter of the order in 1263. The room was frescoed by the painter of the Giotto school Niccolò di Pietro Gerini, the same as the sacristy of the Basilica of Santa Croce and the Loggia del Bigallo in Florence.

last but not least the tomb of Francesco da Buti, erudite Pisan politician and first commentator of Dante’s Divine Comedy. 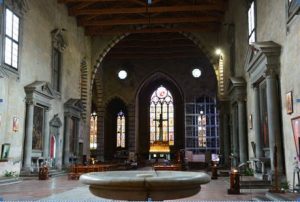 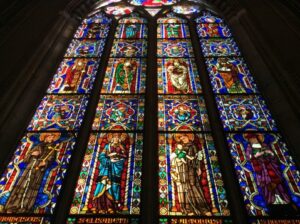 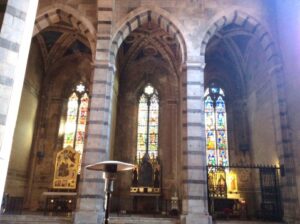