The villa stands on the ruins of a fortress dating from the 11th century. It was built in the 16th century by the Medici as a hunting residence.
It was once at the centre of a small town with a church, stables, a garden and orchards. Throughout the 18th century the villa had a structure that allowed to serve both as a residence and as a centre for controlling agricultural production. One of the owners after the Medici was Pietro Tonini, who played an important role in the Grand Duchy of Tuscany. In 1760 the villa passed to the Banti family, who remodelled it so it could better represent their social and economic prestige, hence the name ‘Villa Delizia’. The interior was sumptuously decorated by the Florentine painter Pietro Giarrè, who also worked at the nearby Charterhouse of Calci.

The villa has three storeys above ground and a cellar. The cellar is divided into three rooms. The ground floor and the first floor (piano nobile) have the same layout, with a spacious central hall giving access to the other rooms decorated with frescoes. The attic, formerly used for drying grains and fruit, is divided by three arches and illuminated by openings on the north and south sides. There is also a natural cave, documented as early as 1619 but no longer accessible. It was used as a secret passage by important citizens fleeing to Pisa.

A major role is played by the garden, laid out on three terraces, with the Renaissance flower park communicating with the piano nobile, the camellias with the ground floor, and the ground with the fruit trees with the cellar. The configuration of the garden is a hybrid of medieval elements (the perimeter wall) and Renaissance features (the flower beds, basins and statues). 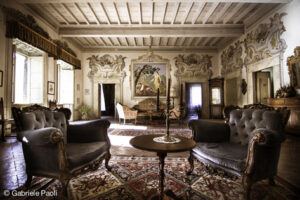 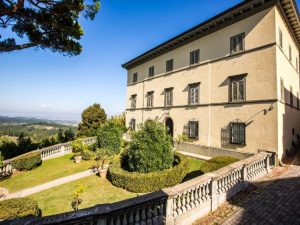 Visits only on booking