The Basilic of San Piero a Grado rises where, according to tradition, St. Peter landed while on his way to Rome. The church was built on the remains of a Christian temple of the 4th or 5th century AD.

A charming example of the Pisan Romanesque style, built of tufaceous stone and white marble obtained from Roman remains, the church shows no façade, but two sets of apses, with three apses facing east and one west. The main entrance is on the northern flank of the building. The exterior is decorated with engaged columns, blind arches and ceramic basins of Islamic derivation.

The interior with three aisles has large columns with capitals and arches decorated in red. Above them is a wonderful fescoes representation of the Popes until the 15th century. The artist Deodato Orlandi painted the wonderful frescoes ‘Facts in the Life of St. Peter’.

Ancient remains of a sacred building dating from late antiquity have come to light in the eastern portion of the church and are currently being studied. The basilica is a wedding location 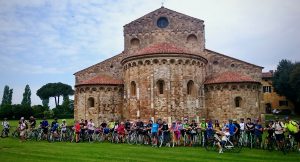